What the Heck is Mushroom Coffee (and Is it Worth Trying)? 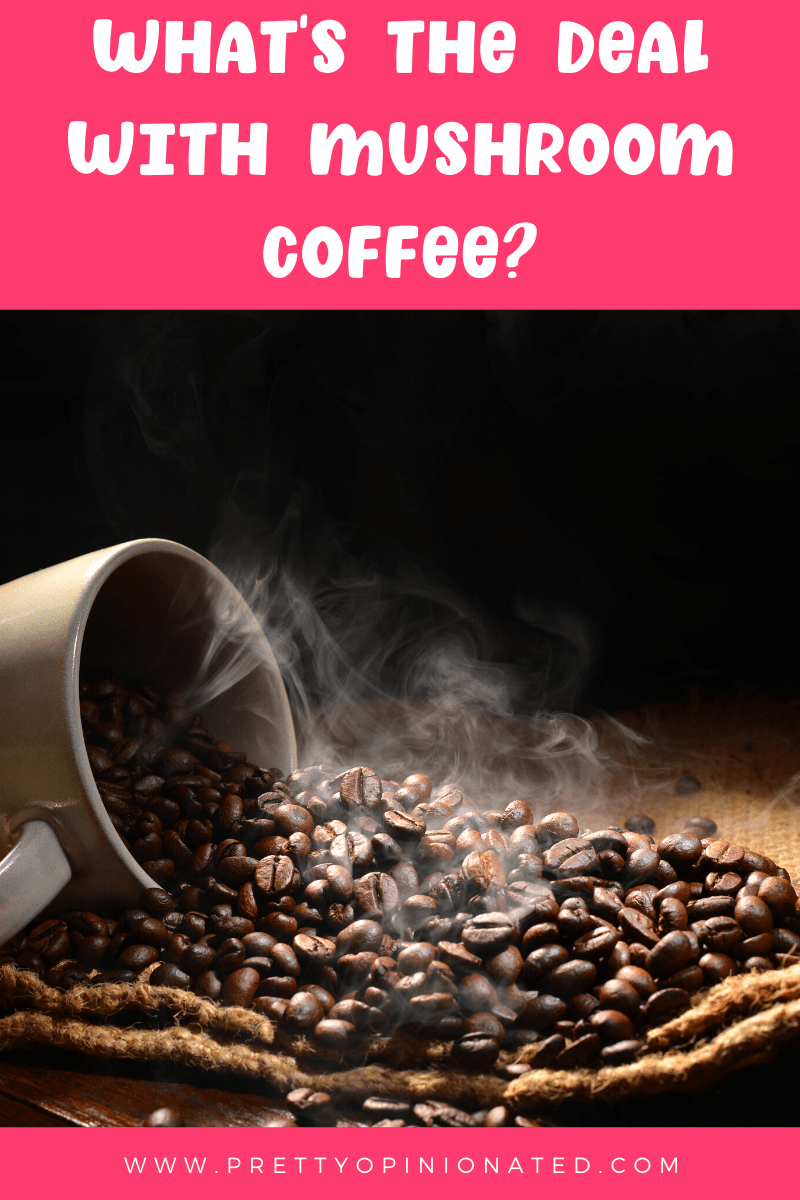 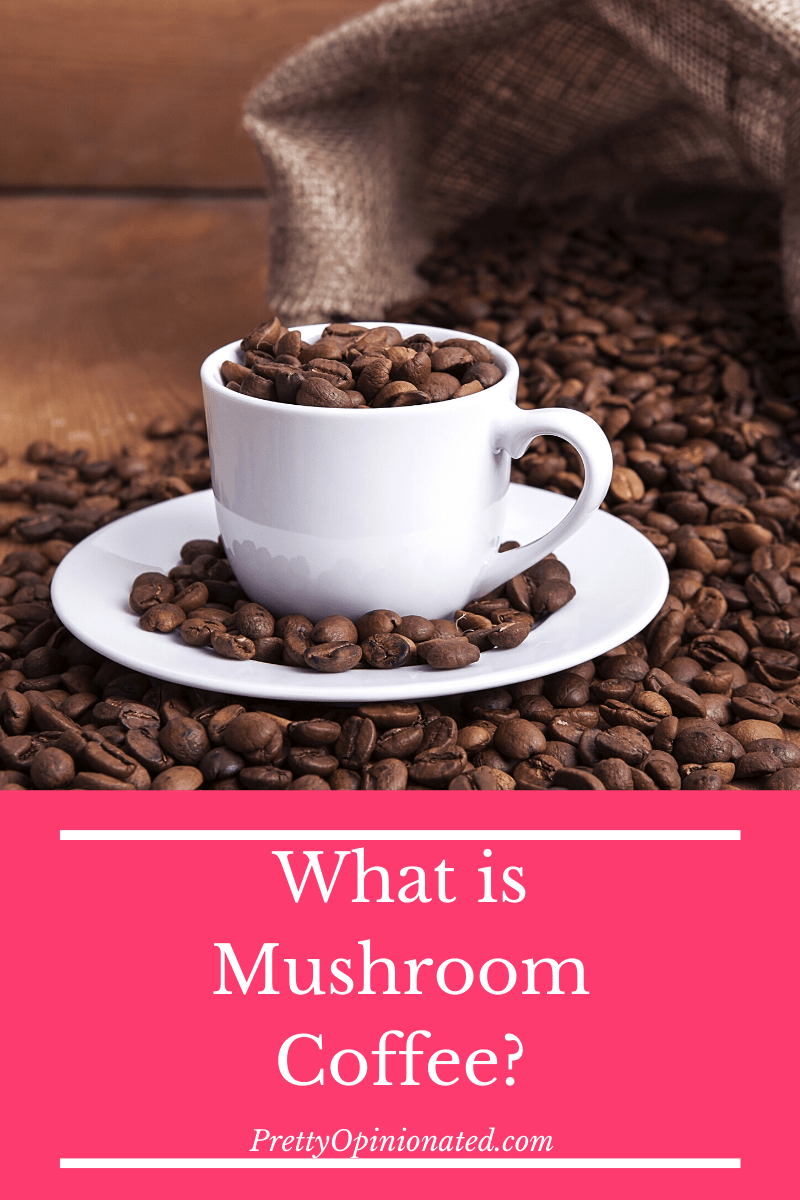 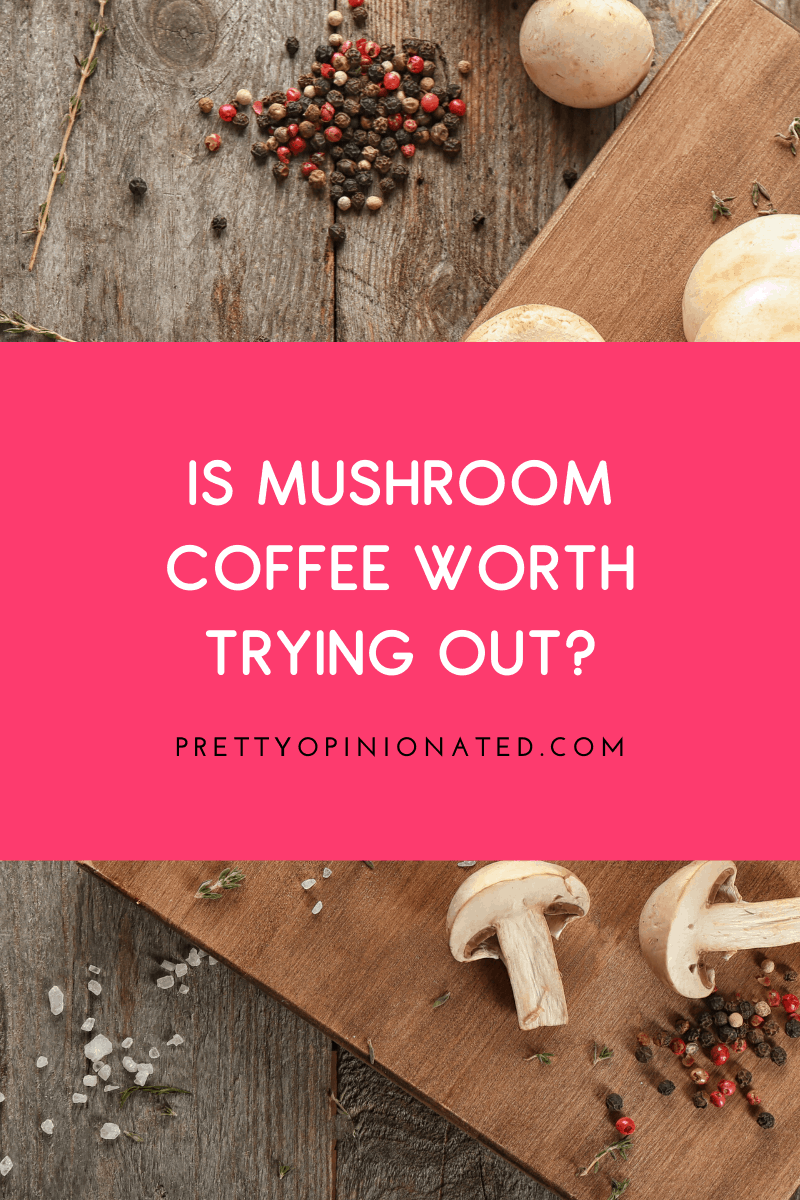 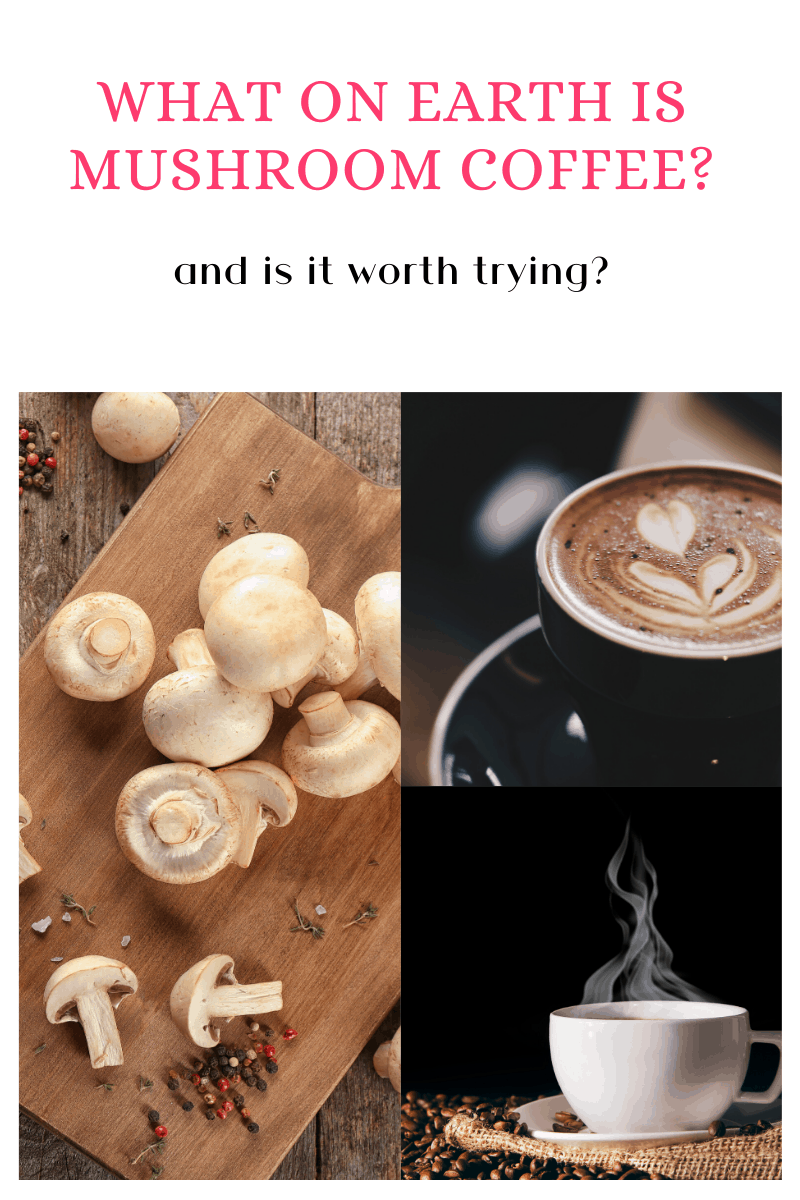 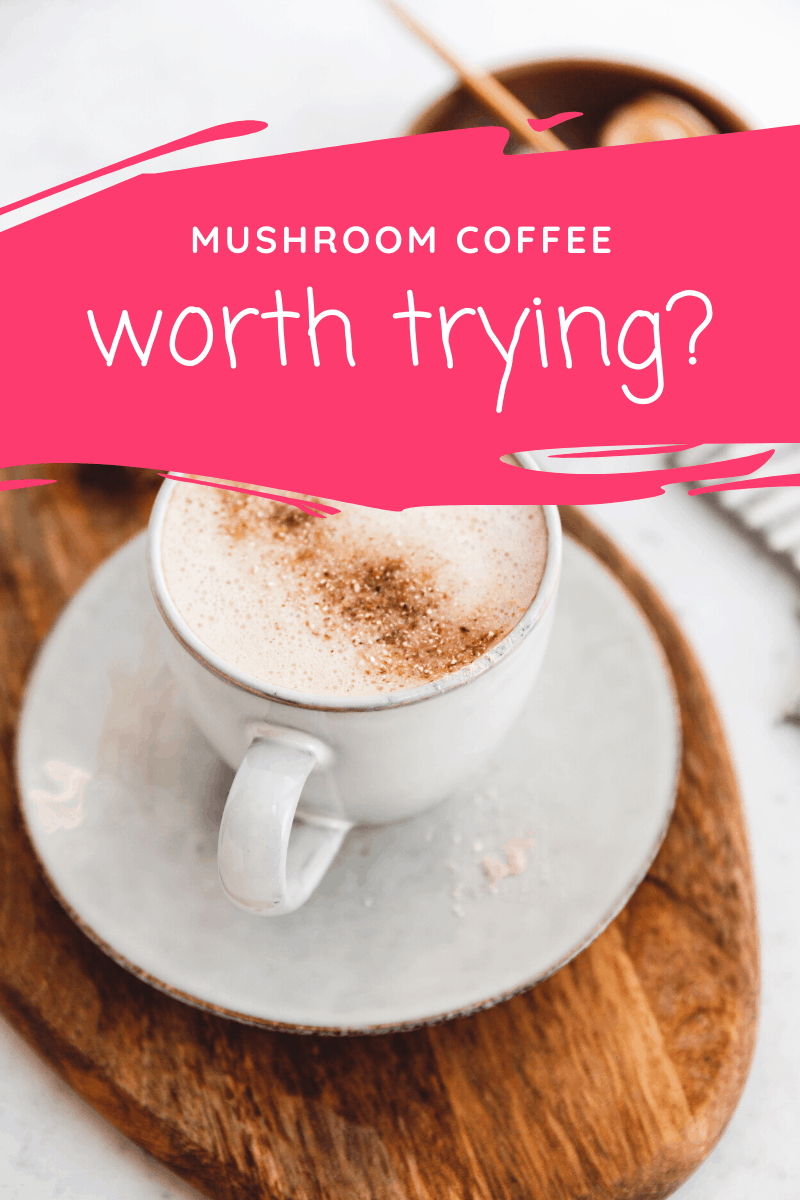 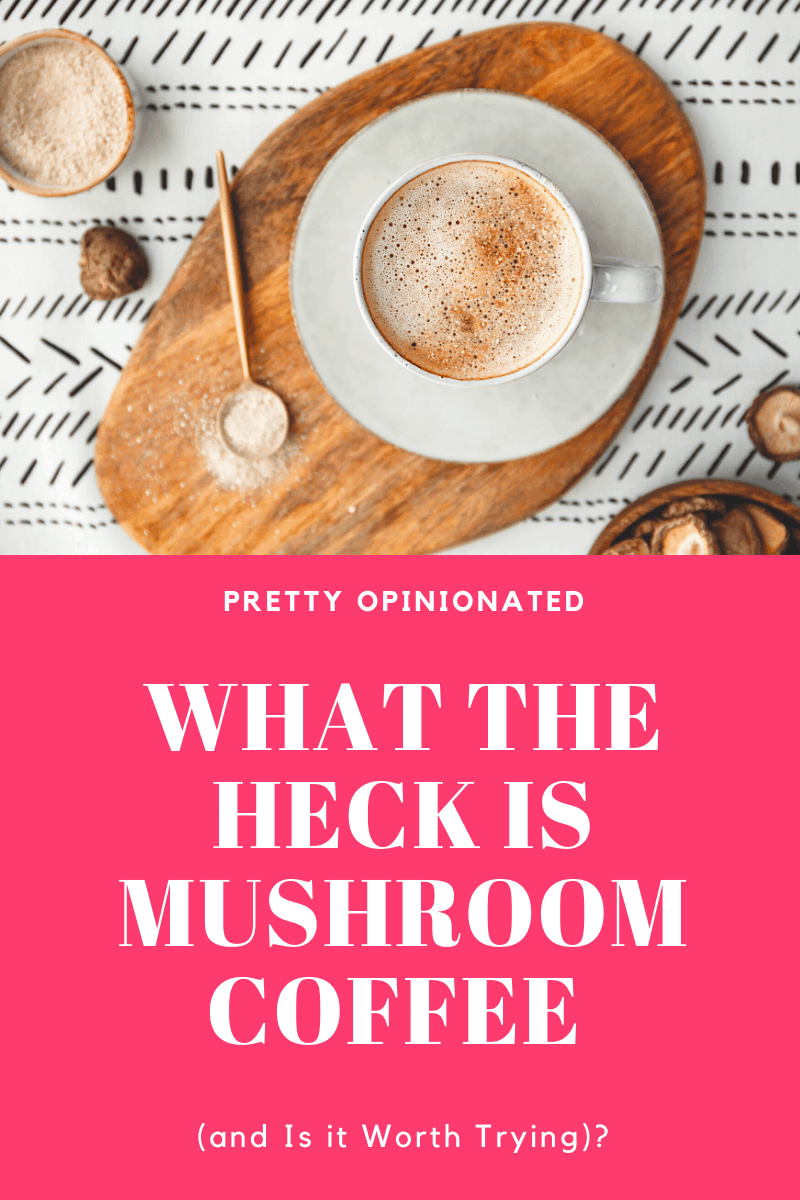 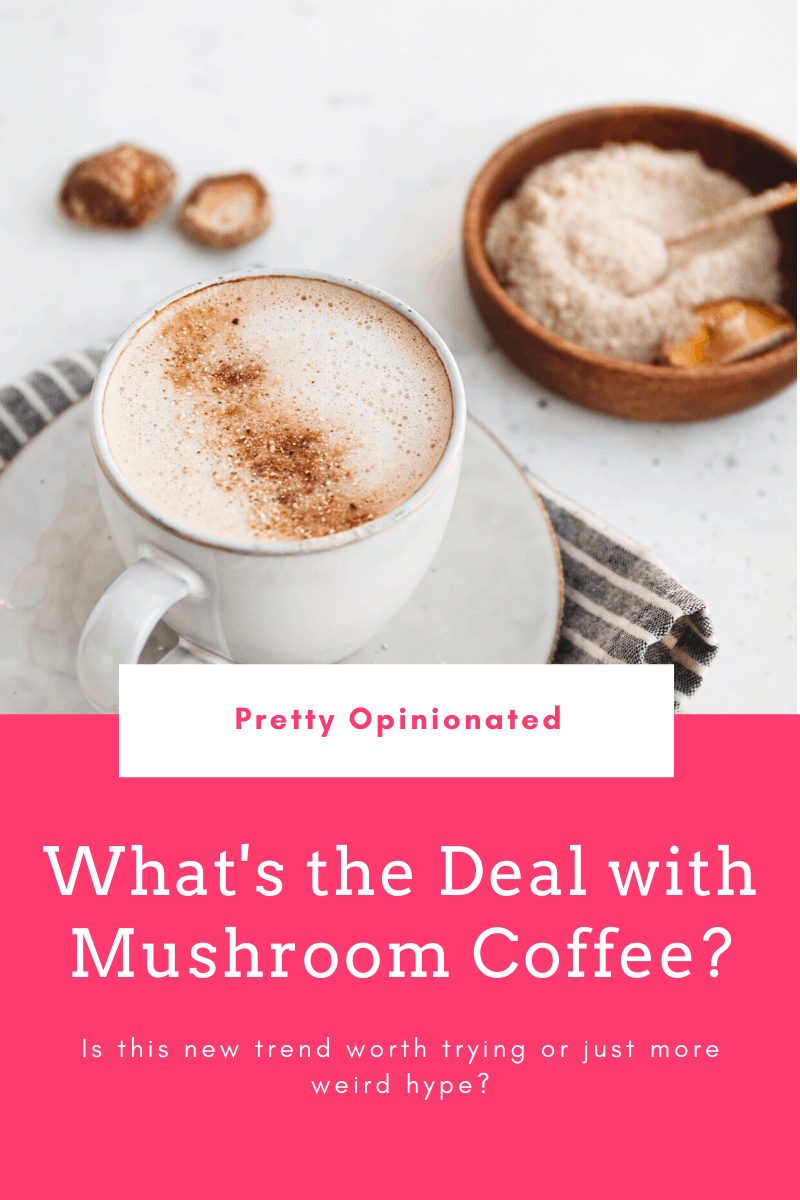 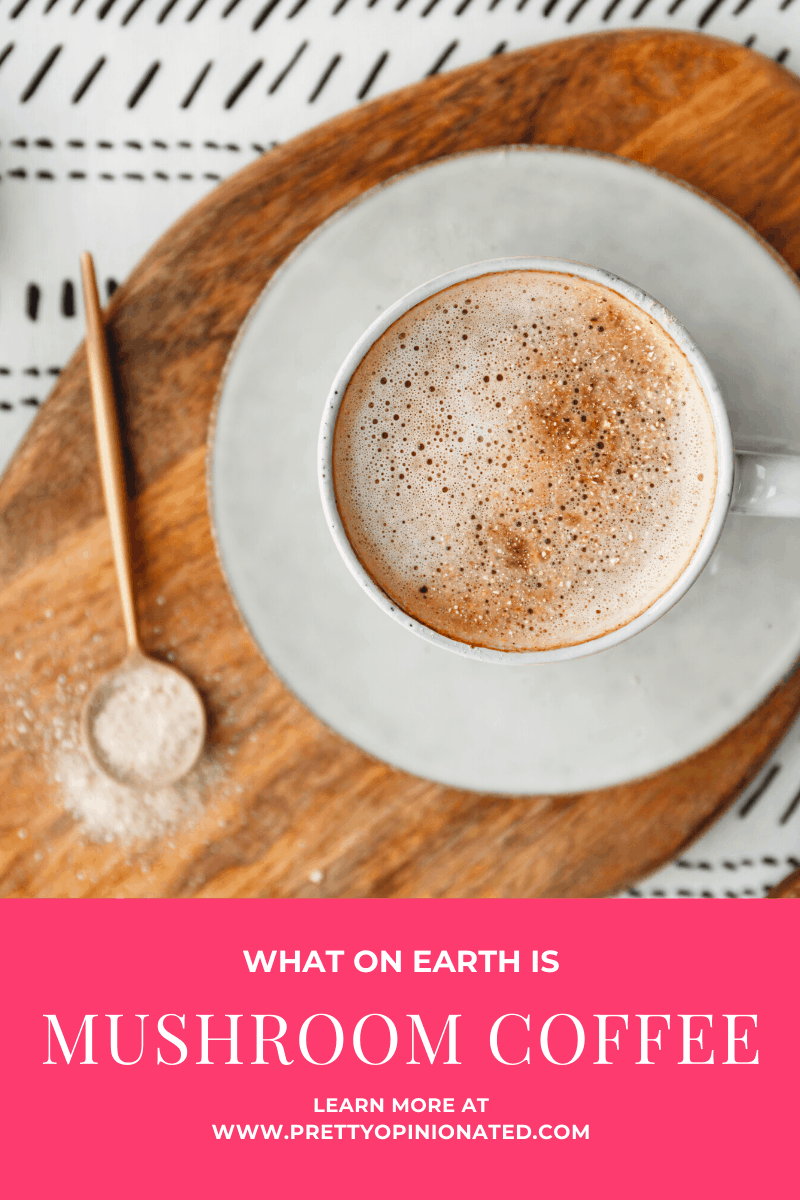 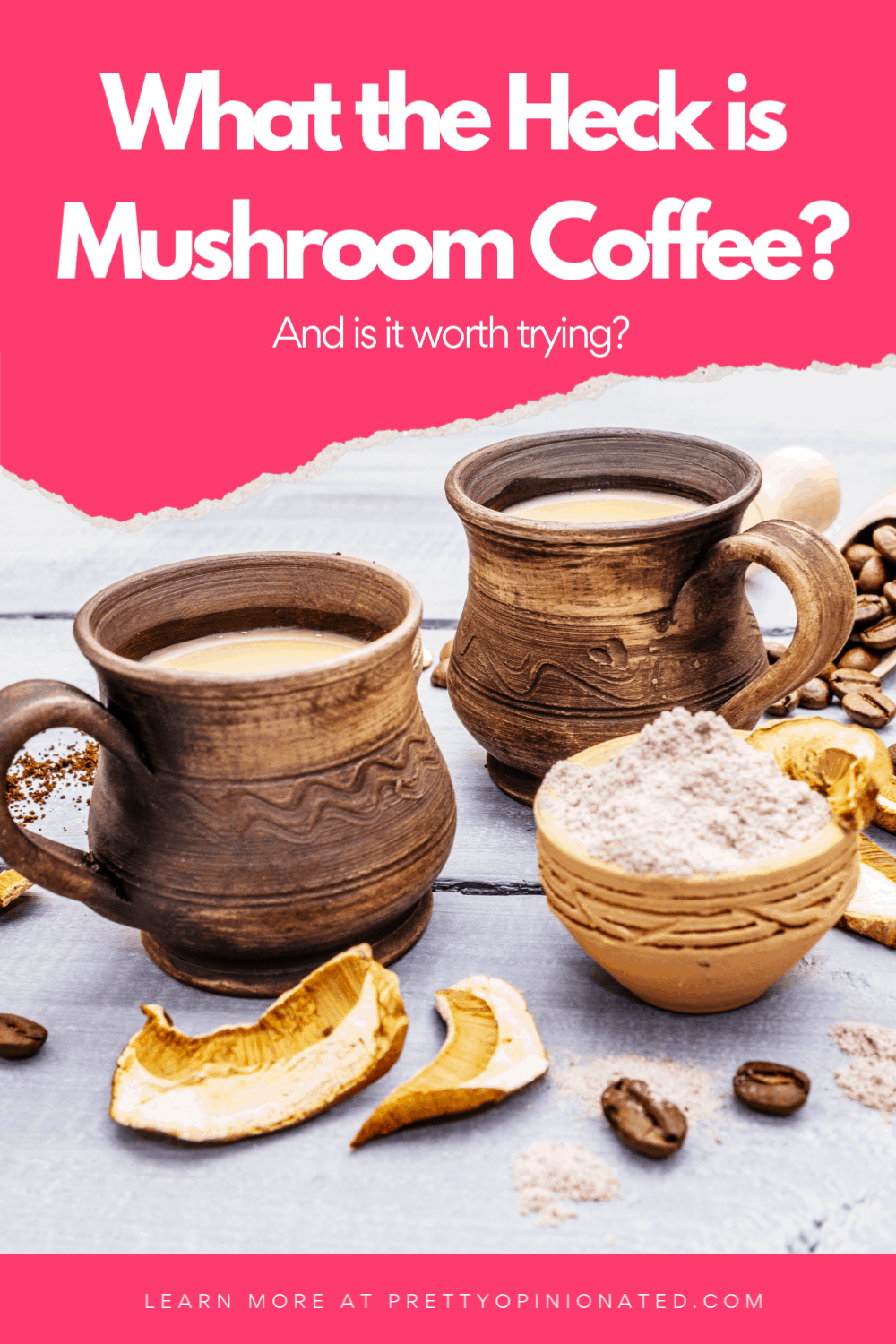 I came across mushroom coffee while browsing a site that talks about future trends (trying to kick my writer’s block), and the idea intrigued me. What the heck is it? Is it made entirely of mushrooms? Why would I want mushrooms in my coffee? Are there any benefits? So, I set off on a wild research journey to answer those questions. Read on to find out what I learned!

*FYI, this post uses affiliate links, so if you decide to buy mushroom coffee (or anything else, really) through them, I get a teeny kickback at no extra cost to you.

What is Mushroom Coffee? 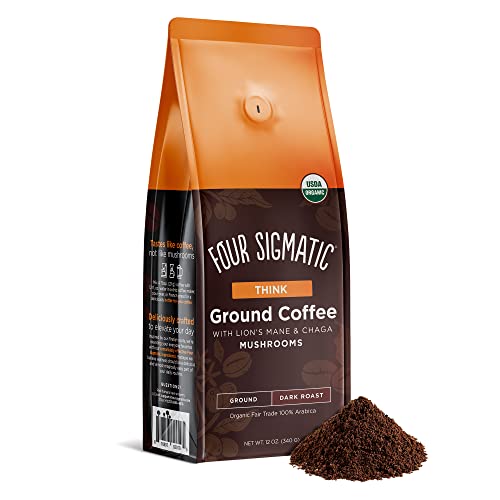 First, turns out mushroom coffee is NOT made entirely of mushrooms, but rather included them in a mix. That makes sense. I mean, coffee isn’t coffee without the beans! It’s just a “coffee-inspired drink,” kind of like how American cheese is really just cheese product inspired by the real thing.

Second, mushroom coffee isn’t exactly a brand-new 2020 invention. It’s actually been around for a couple of years (at least). It’s just starting to catch on here, apparently, thanks to a fun and funky little company in Finland, called Four Sigmatic. I don’t know if they’re the first people to ever put mushrooms in coffee, but they’re the first that I’ve heard of. 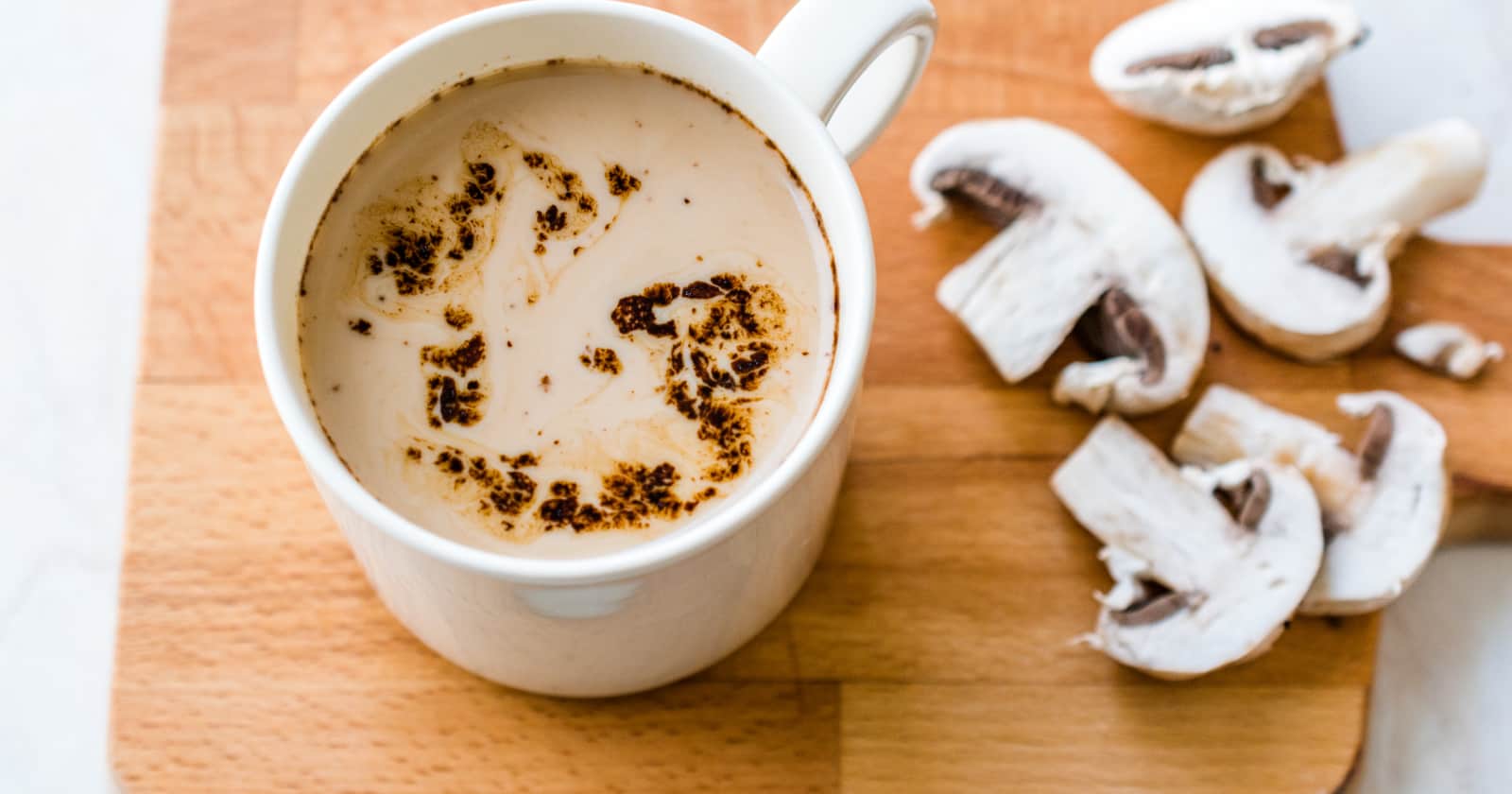 Mushroom Latte Coffee with Milk and Espresso on Wooden Board Ready to Drink. Hot Beverage

My biggest question is, of course, why? Why put mushrooms in coffee? What’s the purpose? Not the “hipster” purpose, but the actual scientific reason? So, I headed over to Science Daily to search through the studies. Here’s what I found about the benefits of mushrooms:

There are also quite a few studies on the benefits of “magic mushrooms,” but Four Sigmatic doesn’t use those. 🙂

So, bottom line, mushrooms are good for you. The real question, though, is are they good for you in coffee? While I couldn’t find specific studies that fully answer my question, I did find one in which researchers studied all the hipster food trends, including mushrooms and coffee (but not together). Regarding coffee, they said:

Overall the habitual consumption of coffee is associated with lower risks of all-cause and cardiovascular mortality, and there is no association between coffee and hypertension development.

The study goes on to say:

Is mushroom coffee safe to drink? 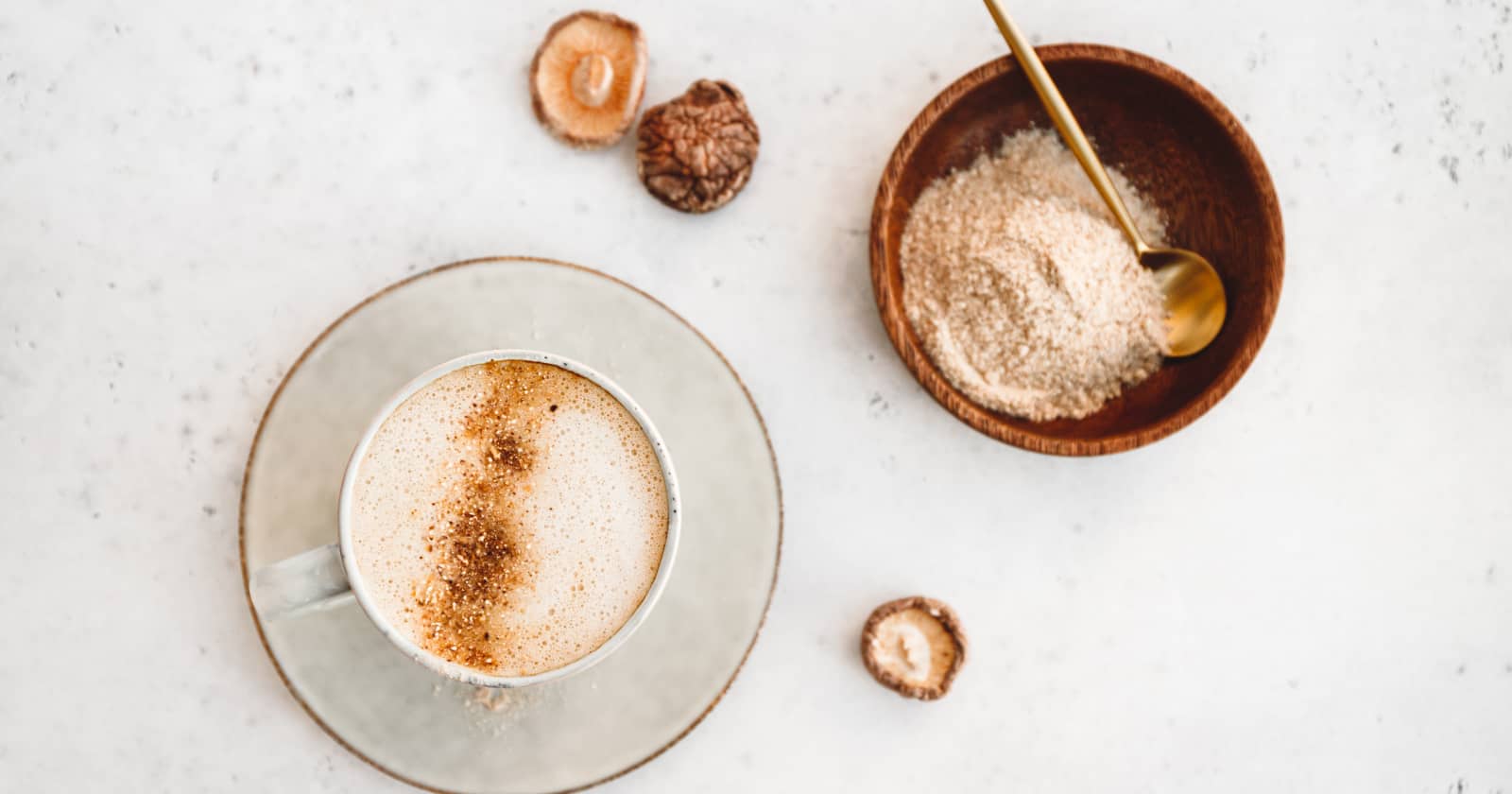 I’m not a doctor, so I can’t tell you yes or no with any real authority. As Cynthia Sass, a registered dietitian, explains on Health.com, “It’s important to know that anything medicinal, even plants and natural substances, can have potential side effects and interactions.” She goes on to say that certain mushrooms- like maitake- can actually interact with medications that control diabetes or blood pressure.

As always, if you have a medical condition and/or take prescription meds, talk to your doctor first. That goes for everything, really. Side note- Did you know that bananas can kill you if you eat too many while on certain medications? Yep, true story, (despite Snope’s over-simplified “false” rating).  I learned all about hyperkalemia during my first semester of nursing school.

So, no, I’m not being overly cautious or silly when I tell you to check with your doctor before drinking something as seemingly innocuous as mushroom coffee.

Oh, one last note regarding safety- I saw a one-star review from a customer that was extremely upset over the warning on the side of the bag regarding “cancer-causing ingredients.” It’s a California Prop 65 warning that appears on virtually every product known to mankind, including all coffee.

That said, a couple of reviewers did complain that the coffee made them violently ill. As someone who has weird reactions to a lot of “nootropic” products, I would start with a very small cup and on a weekend (so it doesn’t interfere with work if I do have a reaction).

If your doctor gives you the okay and you’re not someone who typically has weird reactions, it’s one of those “can’t hurt to try” things, especially if it doesn’t’ actually taste like mushrooms. Which brings us to…

That was my next big question, since I don’t like the taste of mushrooms. According to Four Sigmatic’s FAQ, the answer is no.

Over 20,000 five star reviewing customers say no. Our products taste like coffee or hot cacao or whatever they’re mixed with. If you’re looking to taste mushrooms, sorry to disappoint.

This is a major plus for me. As an insanely picky eater, I’m always looking for ways to sneak healthier foods into my diet in ways that totally conceal the flavor.

Looking through the reviews of their different offerings on Amazon, I do see a common thread. Most people say that while you can’t actually taste the shrooms, they do lend an earthy flavor to the overall taste. I wouldn’t mind that.

Is it worth trying?

You’ll have to decide that for yourself, but I think I want to give it a go sometime. It’s pricier than regular coffee, though, so I think I would wait for a really good sale first. By the way, if you’re not really into coffee, they also sell mushroom cocoa, although that’s also fairly pricey. 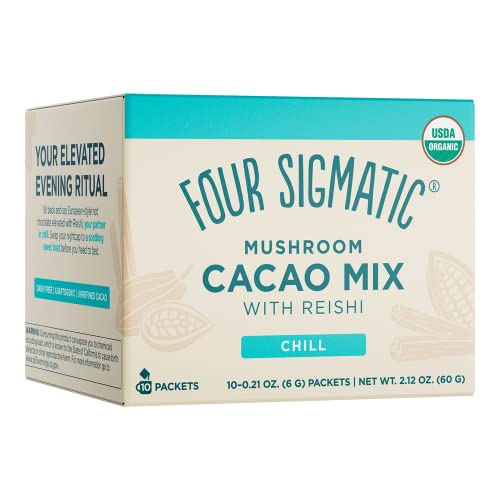 Have you ever tried mushroom coffee by Four Sigmatic or anyone else? Let me know your thoughts below on whether it’s worth trying!