A Guide To Sending Flowers And What They Mean

We all love giving and gifting flowers, and with good reason. They’re beautiful and can be easily displayed, and there is a certain amount of thought that goes into choosing flowers to give. This means that no matter why you’re giving them, they are being given with a token of affection. About 86% of people report that they love receiving flowers as gifts and that flowers make them feel special, but there is much more to flowers than what meets the eye. Remember that the act of sending flowers dates back centuries. But back in the day, giving flowers was not just about bestowing gifts, but sending messages. Therefore, it’s important that you take the time to know what kinds of messages the flowers that you’re giving send. Therefore, you can know what kinds of flowers to send when, and how to communicate through their secret language. Even if the person you’re giving the flowers to doesn’t fully understand the message, the effort and care taken in selecting the flowers will be clear. Understanding what you’re “saying” is so much more significant than just buying a bouquet of roses. Let’s dive into the different occasions in which you would send flowers and what those flowers might say. 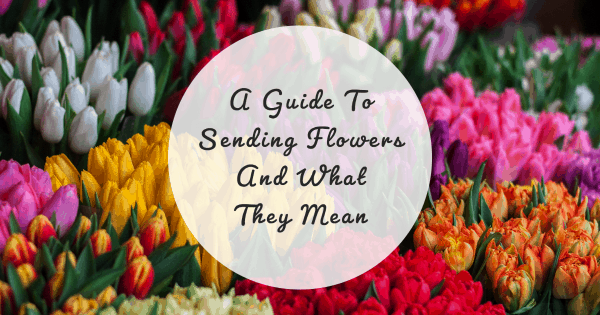 You might not want to give flowers as a gift on a first date. While this may have been the custom once, nowadays it will come off as old-fashioned or perhaps even a little forward. But after a few good dates, you may want to offer flowers as a token of affection, showing the person you’re dating that you like them. You’ll want to buy flowers that are pretty but don’t suggest the overwhelming passion that red roses might. For example, dandelions are a great option because they’re fresh and young, much like your new relationship. Orchids, on the other hand, are bright and smell great and stand as an easily recognizable, lovely flower. Tulips are similarly associated with warmth and vibrancy and once upon a time were so valuable that an entire country depended on them. During the Dutch Golden Age, the Netherlands underwent a “Tulip Fever”. Tulips were bought and sold for exorbitant prices, though this gradually fell out of fashion. Though tulips are no longer so expensive, they’re still rather valuable in terms of their beauty.

You may not think of the holidays as the typical time in which flowers are given. But an estimated 37% of people give flowers as gifts, and those gifts often fall over Christmas, Hannukah, Mother’s Day, and Valentine’s Day. Fortunately, the process of gift-giving is simplified when you give flowers, as there are some classic types of flowers that are typically given as holiday gifts. The red poinsettia is classic during Christmas and can be seen as the centerpiece of decorations during the holidays. Amaryllis is another popular option, as are paperwhites. One reason why these flowers are so often given during the holidays is that they represent good cheer and wishes of success.

Sometimes, we give flowers due to occasions that are less than ideal. Historically, flowers have not only been given during times of happiness but times of sorrow as well. A lot of people send flowers when people are ill, or even following the death of a loved one. The last thing you want is to send a flower that seems romantic when you’re trying to signify sympathy. Fortunately, there are flowers specifically meant to be sent to express sympathy. Mind you, sympathy flowers differ from the types of flowers that make up funeral arrangements, as they’re meant to make up much smaller arrangements. Lilies, daisies, and roses are often given as sympathy flowers, ideally in shades of white, as those signify purity. With that being said, if it feels like the right time to send flowers that signify hope and rebirth, you may also want to send a more brightly colored bouquet, which is why some send yellow roses as sympathy flowers as well.

There is something to be said about sending flowers as a token of appreciation after someone has done a service for you. For example, if a friend helped you and your spouse get away by watching your kids for the weekend, or if someone helped you pack up and move during a difficult time. There are plenty of reasons why you might want to thank someone. And while a card is a good start, flowers take it to the next level. Though 2,760 packages are shipped every second, not a lot of people can say that they received flowers as a thank you gift. Much as with sympathy flowers, you want to convey elegance and understanding with the flowers. Daisies are great options, as are lilies and carnations. Otherwise, however, you may want to just do some minor research into the types of flowers your recipient typically prefers. Really, though, nothing says “I appreciate you” like a bouquet of flowers in general.

There can be a lot riding on anniversary flowers. You want to signify both romance and appreciation and come off as serious without being solemn. Therefore, you may want to consider flowers like the classic red or pink roses, which are classic without being boring, or perhaps lilies. Irises are also great options, as are daffodils and asters. The one color to avoid? Yellow. Yellow flowers signify friendship, and yellow carnations go so far as to signify disappointment, historically. On that note, it’s no wonder that mainstays like red or pink roses remain popular.

There is a lot to be said through sending flowers, and there’s a reason why we still send them to this day. If you take the time to find the right ones for your purpose, you can send the perfect message, and show someone that you really care in a multitude of different ways.