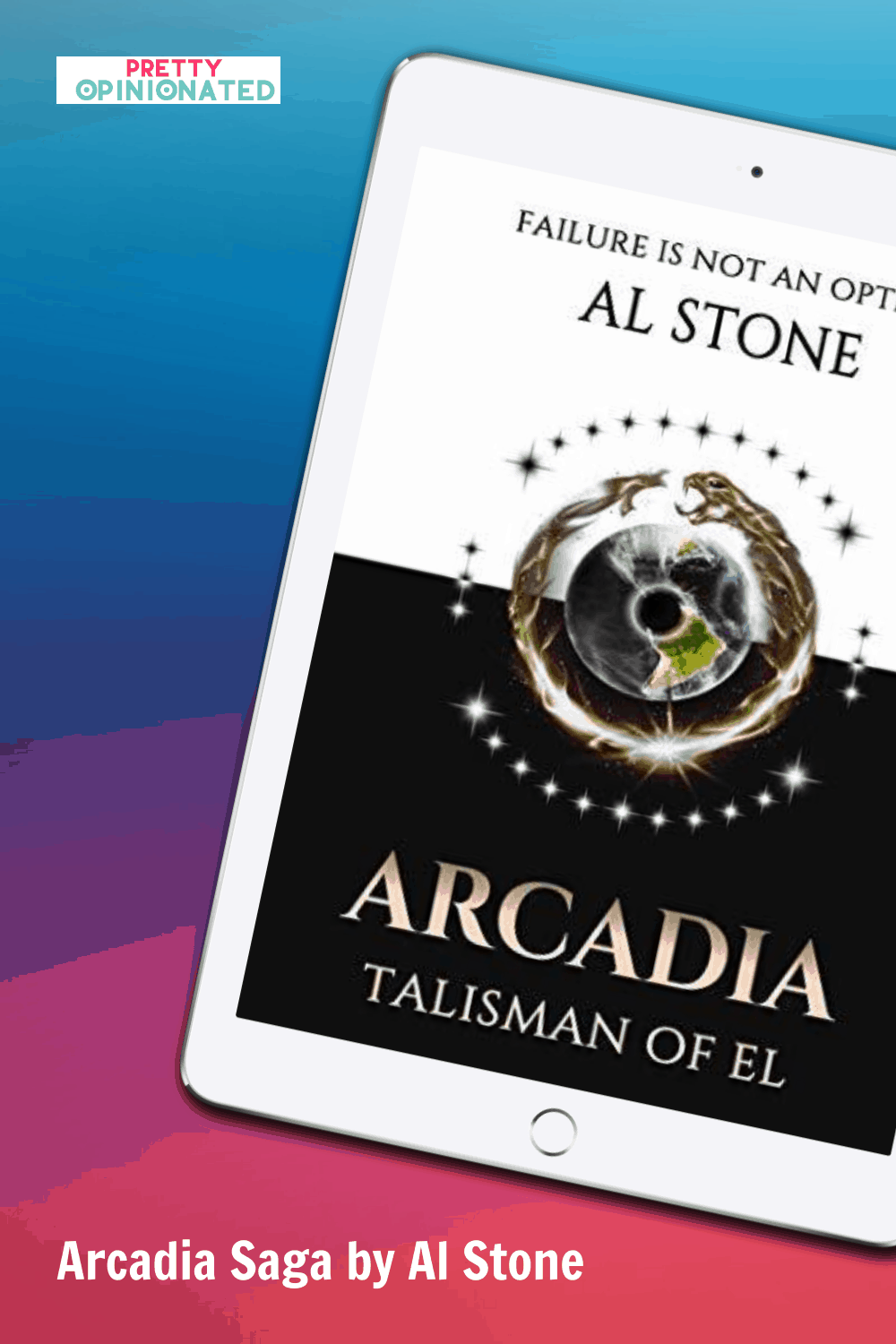 If you’re craving a new YA fantasy read that really pulls you in, you’ll definitely want to check out Arcadia by Al Stone! The complete trilogy is currently available on Amazon. Read on to learn more about it, plus check out an excerpt from Talisman Of El (Arcadia Book 1). 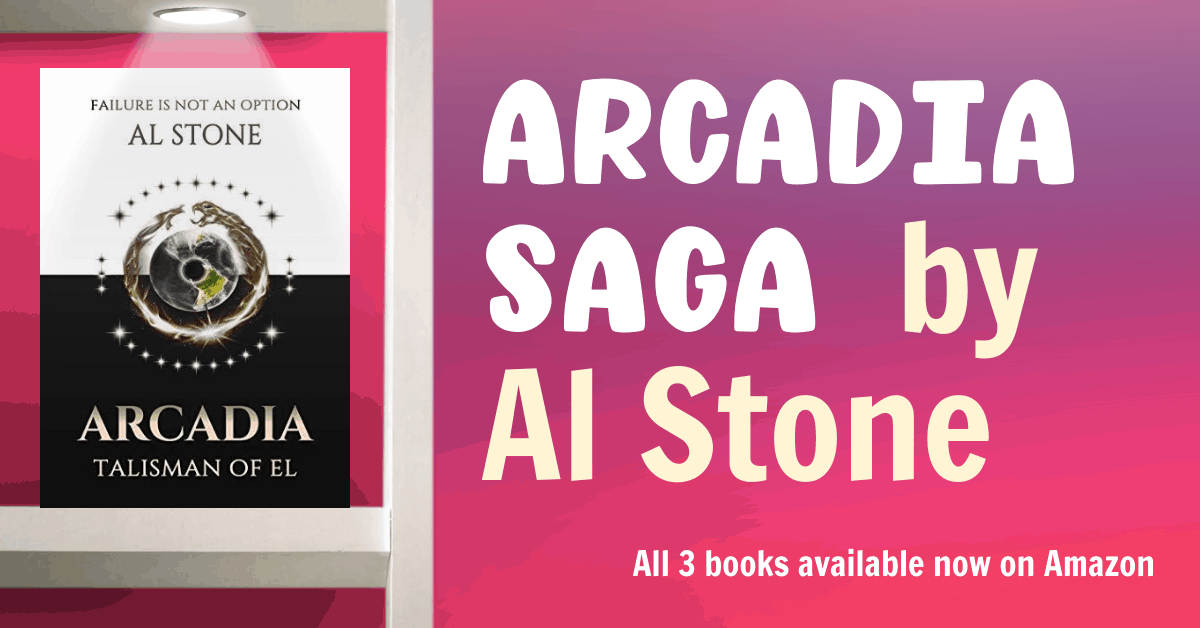 Confession time- I haven’t even come close to finishing my 52-week reading challenge this year. Like pretty much the entire world, I’ve just been so scattered and unfocused throughout most of 2020. While I’ll never hit 52 by the end of the year, I want to at least get into the double digits before the clock strikes midnight on New Year’s Eve!

One of the series on my to-read list- the Arcadia Saga by Al Stone. All three books are out, so I can just dive in without worrying about waiting to find out what happens next! Read on for descriptions, sneak peeks, and more for each book in the trilogy.

*This post includes affiliate links to the Arcadia Saga on Amazon. If probably know this, but just in case- if you click them and then make a purchase, I get a small commission at no extra charge to you.

WHAT IF YOUR WHOLE LIFE WAS A LIE? One Planet. Two Worlds. Population: Human … 7 billion. Others … unknown.

When 14-year-old Charlie Blake wakes up sweating and gasping for air in the middle of the night, he knows it is happening again. This time he witnesses a brutal murder. He’s afraid to tell anyone. No one would believe him … because it was a dream. Just like the one he had four years ago – the day before his dad died.

Charlie doesn’t know why this is happening. He would give anything to have an ordinary life. The problem: he doesn’t belong in the world he knows as home.

He belongs with the others.

Excerpt from Talisman of El

‘I miss Mum too, but it’s been five years. Give up before you end up killing yourself. Arcadia doesn’t exist.’

His father looked at him. ‘It’s out there. I’m going to find it. I will bring her back.’

‘Mum’s dead,’ Derkein snapped. ‘When are you going to get that?’

‘Dad, please –’ An ear-piercing scream ripped through the building. Derkein froze, his eyes the only things that moved. His gaze fixed on his father, who was rummaging through his bag. He took out a black pistol and turned to Derkein, a tortured expression on his face as he placed the weapon in his son’s trembling hand.

‘Shoot anything that moves,’ his father instructed. He placed the talisman around Derkein’s neck, tucking it inside his shirt. ‘Don’t let it out of your sight.’ Cupping Derkein’s face in his hands, he made him meet his gaze. ‘I’m so sorry I got you involved in this.’ He grabbed another gun from the bag.

‘What exactly have you got yourself into, Dad?’

His father looked at him with a solemn expression. ‘If anything happens to me, you find Thomas. Tell him  … Tell him he was right.’ He headed towards the door.

The double doors burst open with a bang.

Derkein glanced around the room in panic and confusion. He saw no one but his father. Then he felt a sharp pain in his arm, heard his shirt tear, and cried out. Something warm dribbled down his arm, and when he placed his hand on it, he saw blood. His father screamed, and he looked up and saw him flying across the room, crashing into a bookshelf that collapsed under him.

‘Dad!’ Derkein sprinted towards him but felt a powerful blow across his chest that sent him flying backwards, and he landed hard on the floor, his gun falling out of his hand. Staggering to his feet, he glanced around for whatever had attacked him but saw nothing. His gaze landed on his father, who was groaning  … and then he was gone. There were no bright lights or loud noise. He had just vanished.

As Derkein stared wide-eyed at the spot where his father had been lying only moments before, something like a blast of electricity stunned him, and he felt an intense burning inside his chest. He let out a cry as his body lifted off the ground and hung in midair. Seconds later, he came crashing down … (Prologue, Talisman Of El)

WHAT WAS SHALL NO LONGER BE. WHAT WAS NOT SHALL NOW BECOME.

Despite having the protection of the talisman and the Legion, a reforming force of warrior angels and elementals, guarding his every move, things are not looking good for Charlie Blake. Tasked with the responsibility of saving mankind, finding the four diamonds to restore the talisman is all he can think of, but when his prophetic visions start to invade his reality and he suddenly can’t distinguish the dream world from the real world, the pending extinction of mankind becomes the least of his problems. Everyone assumes Charlie’s dormant powers are activating, until he starts showing symptoms of a deadly disease.

With his nemesis, Gaddis, threatening the lives of his loved ones, he faces a race against time to locate the Stone of Raphael, the air diamond, before an imminent pandemic destroys civilization. As he ventures into dangerous lands once again, he unearths shocking revelations about his past life that forces him to question his allegiance. With no one to turn to for answers, he can’t help but wonder if his purpose is truly to save mankind.

Only a few ever survive.

That is unless Charlie Blake can locate all four diamonds to restore the Talisman of El and receive his calling from the remaining three elements before the Annus Magnus strikes. With both Arcadia and the mortal world in a state of unrest, his life quickly spirals out of control as it seems everyone has put a bounty on his head. Maybe even his closest allies.

Not knowing who to trust, Charlie starts to dig up the past. When new revelations arise, he begins to question whether the Legion of Light really is what it claims to be and whether he’s been fighting for the wrong side all along. The line between good and evil is no longer as clear-cut as it used to be, especially when it appears Charlie’s destiny could very well be to destroy everything he loves.

Hero or villain? Charlie isn’t so sure anymore.