Today’s holiday gift ideas post focuses on the most challenging age group of all: the tween! Ah, the tween. The magical, wonderful tween. Gotta love that age group, right? Jacob is now officially a tween boy, which makes him pretty much impossible to shop for! Jake is getting one really awesome present this year and understands he won’t have a mountain of gifts. Still, I want to give him a few others to open! Below are some great tween gift ideas for both boys and girls, in all budget ranges. Some I’ve received for review recently, others I’ve gotten throughout the year and a few more are just things that I’m either buying or really like. Check them out! I’ll be honest, when Boogie Boards asked if I wanted to review their Jot 8.5 and Jot 4.5, I had every intention of keeping them for myself. I’ve been wanting to get my hot hands on these for a while. I use dry erase boards all the time for work. The problem? They get all gunked up so fast. Boogie Boards are the perfect solution. You write on the surface with the included stylus, then hit a button to make it all go away when you’re done!

Alas, it took about 40 seconds for Jacob to hone in on where I was hiding them! Literally. I kid you not. He has radar for new stuff to steal from me! Boogie Boards are great for tweens because they can draw til their heart’s content, then wipe it away with the press of a button. The Jot 4.5 is just the right size for fitting in a stocking, then in a purse! Tween girls will love the concept of sharing notes with each other that they can instantly wipe out. Think of it as SnapChat without the scarier aspects of it! On the more practical side, it’s also great for writing down homework assignments until they get home. I’m all for anything that eliminates the need for kids to carry binders or agendas. Backpacks are already too heavy. I encourage Jake to leave as much at school as possible. I don’t need him developing back problems by 7th grade like I did!

The Boogie Board Jots are compatible with the Jot App, which means you can use your tablet or iPad to scan your notes and save or share them. I’m having a little trouble finding the app, so I’ll check on that for you and get a link to it asap. Boogie Board also makes a higher-end model called Sync, which comes with capabilities to automatically transfer your notes via Wi-Fi.

If you recall, I reviewed the very first Brick Loot box last year around this time. They’re still going strong, celebrating their one-year anniversary. HUGE congrats to them!

While the December box is already getting ready to ship, you can still get a subscription to Brick Loot for your favorite LEGO or building block fan, print out a picture from the site and wrap it up in a box to let them know what they can look forward too. Check out this unboxing video from a Brick Loot fan on YouTube to get a better idea of what’s in the recent boxes.

Boxes come with different items every month, including special-editing LEGO mini figures and mini brick sets designed exclusively for Brick Loot. Aside from the monthly subscription, you can also shop the store to find some neat items for those stockings!

Subscriptions starts at $27 a month plus shipping. Subscribe at BrickLoot.com now. They also have a sweepstakes for a chance to win 6 Brick Loot Boxes, so check that out. Speaking of LEGOs, I had a chance to check out one of the coolest history books of all time: Medieval LEGOby insanely impressive Greyson Beights. Greyson is a 15-year-old history student in his 3rd year of university studies. WHAT? Smart, right? I’m actually going to interview him! I had questions ready, thought I sent them along, but very bad things happened with my email and they got lost in limbo. So keep an eye out for that in the New Year. Anyway, back to this awesome book. It’s educational, yes, but in a fun way that actually made my son want to read it. See, the history part is illustrated with these elaborate LEGO scenes! The picture above illustrates the Treaty of Windsor. The accompanying text keeps it snappy and entertaining. Your tween will learn something new AND actually retain the information because it’s presented in such an incredibly cool way. Plus you can tell them that it was written by a 15-year-old. Instant cool points!

Medieval LEGO is available on Amazon for just $11.51 for the hardcover version, which I think is incredibly reasonable. As you recall, I reviewed five Klutz Activity Books just over a month ago. These are among my favorite holiday gifts for tweens. My favorites were the String Art and Pop Collage. You can find Klutz books on Amazon, in most major craft stores, in the Scholastic store, and in other book stores. If you’ve been thinking of getting a Nintendo 3DS XL for your tween, but didn’t want to pay close to $200 (or more), this new bundle with Super Mario 3D Land pre-installed  is pretty great. It’s actually the “old” version, but unless your kids need the latest and greatest of everything, it’s still new to them. By “old,” they mean, you know, new up until like five minutes ago, when the NEW new one came out. It should only be around $130. If it’s selling for much more, don’t get it. Find it somewhere else. I’m linking to it on Amazon to show you, but when I looked, third party sellers had it for $199. DO NOT  pay that much for it. Seriously, don’t. It’s not supposed to cost that much, otherwise you might as well get the brand new version, which is, ironically, selling for like $179. 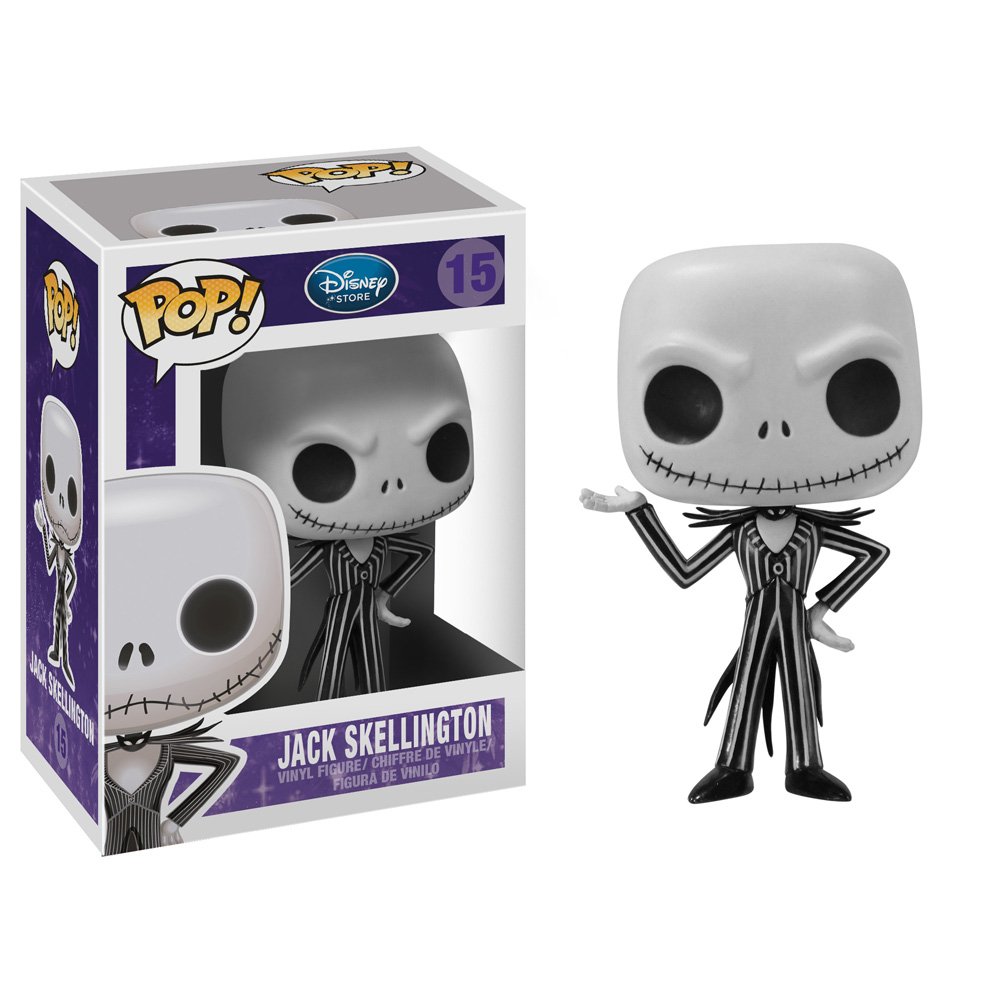 Just about every tween on my list is getting at least one of these! Not necessarily Jack Skellington, but some sort of character that matches their personality. They have characters for EVERYTHING! Jacob just started a “collectibles” shelf, so I grabbed some gamer’s Funkos for him. Sal’s son is into monsters and horror movies, so it’s probably going to be Chucky for him. Amazon seems to have the best prices on them, with some as low as $6, and most around $8. Stores like FYE and Books a Million have them on sale through the season in my mall, but even with the BOGO deals, they don’t beat Amazon. 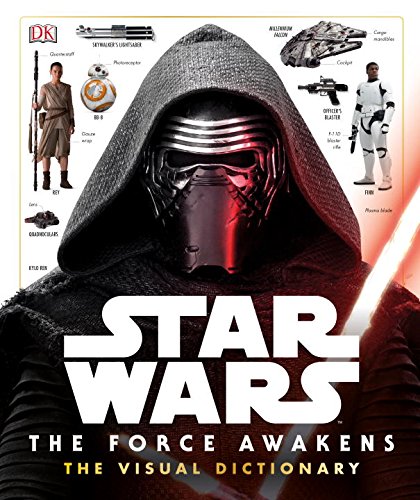 A new Star Wars movie means all new movie merch. Since most tweens really aren’t into the toys anymore (although Jake does love the light sabers still), books are a great way to celebrate their love of all things intergalactic. Get them caught up on the whole new generation of Jedis with the Star Wars: The Force Awakens Visual Dictionary for $14.02, with 80 pages. Looking for a book with a bit more heft? The Ultimate Star Wars has 320 pages and covers pretty much everything, but it’ll run you $23. 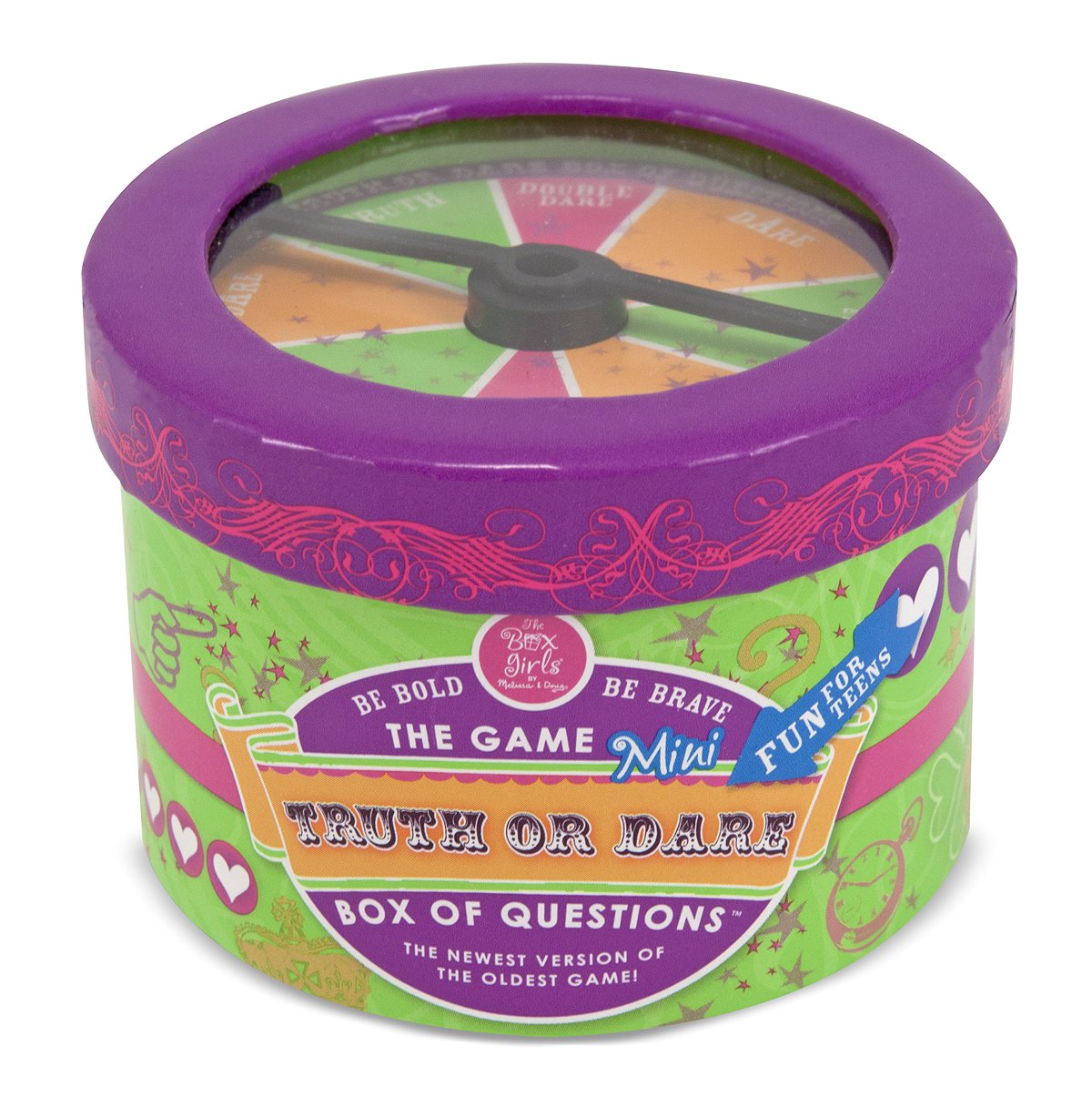 If your tween is perpetually hosting slumber parties, she’ll love Melissa & Doug Truth or Dare Box of Questions. It comes in full-size and a mini-version, each featuring a spinner as well as plenty of “truth” questions and daring dares! Since it’s made by M&D, you know it’s going to be “clean.” In other words, no one is getting dared to run naked through the streets or play 7 minutes in heaven with your older son! Hey, we all went to slumber parties, you know how they go! The full game includes 82 cards and sells for $9.99, the mini has 42 cards and sells for $4.99. I know furniture sounds like a crazy holiday gift idea for tweens, but if you have a gamer, it’s actually not as off the wall as it sounds. Depending on your budget, you can get anything from a cool bean bag chair to a mini rocker with speaker ports (above) all the way up to an insanely awesome decked out gamer chair like this one on Pottery Barn Teen (be warned, it’s $400!). With colors and styles to fit all room decor, these make great holiday gifts for tween girls and guys! If you let your tween paint her nails, she’ll love these oh-so-pretty mani/pedi lap desks! You can have them personalized or monogrammed. Even if she isn’t into nail painting yet, they’re perfect for storing all sorts of other treasures. I kind of want one for me! They’re usually $89, but right now they’re on sale for $55. I saw these awesome Star Wars™ First Edition STREET by 50 On-Ear Headphones on PB Teen that Jake would LOVE. He’s not getting them because they’re $199, but I thought I’d share them for hardcore fans out there. Jake burns through head phones and gaming headsets like you wouldn’t believe. Doesn’t matter if they cost $10 or $100. He literally went through three pairs of $90 Turtle Beach head sets in less than six months. I cannot find a pair that can stand up to him, so I stopped buying expensive sets. Now, I buy him cheap sets under $20 and replace those every other month. Cheaper than replacing $100+ sets every other month, he kills them at the same rate no matter the price! Anyway, whether you opt for expensive head sets or cheap backup sets, they do make great gift ideas for tweens!