5 Educational Apps to Occupy the Kids This Summer 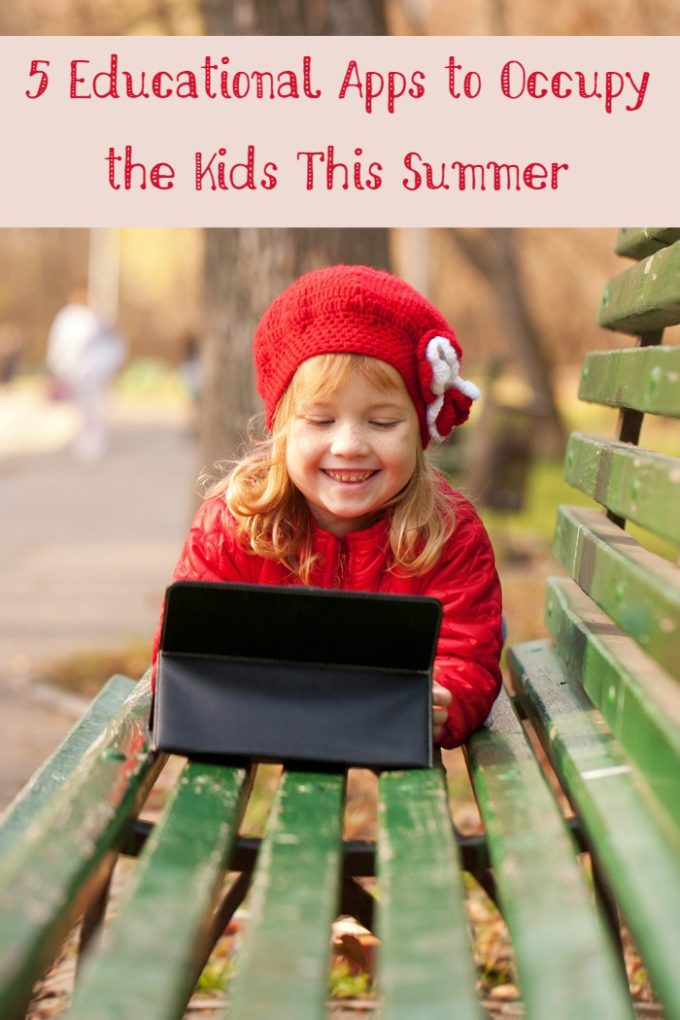 Looking for ways to keep kids entertained AND prevent summer slide? Educational apps are the best of both worlds! Huge thanks to Caroline of Culture Coverage for putting this list together! Check out her post below for five great educational apps to occupy the kids this summer! Kids get to have all the fun sometimes. Now that it’s summer break, they’re free from the bonds of school for several months and you’re stuck figuring out what to do! Thanks to Pretty Opinionated for featuring our article to help add some ideas to the pot. For something a little more adventurous, check out her post about setting up your own home waterpark.

School’s out for summer. Yet school’s not out forever, and it’s not really out for mom and dad either. That means your young ones need something to do during the day if they’re not at camp, Scouts, or visiting Grandma. They’re likely going to be spending a good chunk of their time at home with someone you trust.

Once upon a time, the solution was to pop them in front of the TV. Maybe if you were lucky PBS had something good on or there was an appropriate show they could watch. Cartoons felt like a healthy choice, but they’re mostly just mind candy.

Video games are interactive, but they’re not always as educational as you’d like. Unless your kids are playing some really thorough and interactive games (and they do exist), it’s probably just a distraction. So what about apps? As it turns out, there are quite a few very useful apps that can help educate the kids and keep them busy for a while.

I’ll admit that I’m a sucker for the old classics that have reinvented themselves to be relevant in today’s world. Reading Rainbow is one such thing that has continued to be a truly great resource for kids by encouraging them to read and expand their minds. Just like in the old days, Reading Rainbow returns to both suggest books and bring them to life.

The Reading Rainbow Skybrary features books to read as well as interactive videos to help keep the kids drawn in if they aren’t fully onboard the reading train just yet. Even if they are, it can still be nice to have something to break up the monotony.

As you might expect, Reading Rainbow is focused on a younger audience and probably won’t be as appealing to middle or high schoolers (and by that point, it is probably not best to force reading upon them).

Since we did something for the younger kids, we should have an app for the slightly older ones. As much pain as numbers can cause our children as they progress through school, why not take a different approach to them by having them play with a map that actually shows real world applications of numbers?

Incredible Numbers does this by explaining the origin of things such as Pi and how codes are broken. It’s presented in a largely visual format instead of just a bunch of formulas and dry digits. This app is one way to connect your kids to the applications of the things they’re starting to learn.

Since the concepts are a little bit next level, it probably isn’t a good choice for children in elementary school or below unless you just want to show off some cool stuff yourself. Of course, if you feel your kids are ready, try it out!

Here’s another good one for the younger children (around 10). This app lets kids learn about the ecosystem and how introducing animals or plants can have beneficial and negative effects. From as early as the first grade, they’re learning about the food web and how different organisms interact.

The app gives them a chance to be the master of a biome of their own to see just how big of an impact subtle changes can have. Here, they can control who and what lives in a specific area and ultimately figure out how to balance plant and animal life. Due to how interactive this “game” is, it’s sure to keep them busy for a while.

The app should be striking for the young ones, but by the time they hit middle school it may not hold their attention for so long.

As much fun as it can be, physics felt really painful in school because of all the numbers. This app doesn’t have that problem because it focuses on all the cool stuff about physics. Monster Physics pits the player against a series of challenges that need to be solved by building different things such as rockets, cars or any number of different inventions.

It has a slightly goofy look to it, but that helps hide the fact that the user is solving real world physics problems, thus taking away some potential anxiety. As you might have already guessed, the best part of this app is being able to take part in it without getting too bored. You can actually play it with your kids and have fun together.

Considering it involves physics, this app is probably better put to use with older kids. Yet since you might also enjoy it, it can easily become a game you play with your younger kids.

NASA has definitely fallen on hard times as far their budget is concerned. That problem is not shared by their interactive app. It allows users to check out what NASA is currently up to. It also lets you share what’s going on with others (which you may or may not be okay with depending on how old your kids are).

Your kids will be able to see the latest images and stories about NASA and will have the opportunity to browse the Earth and stars at their leisure. There’s a ton of information about current missions, but I think the best parts of NASA’s app are the visual elements and the explanations that go along with each item.

Like most apps, it offers real insight into the world around us and helps connect kids to something more than just words or numbers written on a screen. The best use of any form of education is to get the kids thinking outside of the narrow box that society creates. That way they can be better prepared for the real world.

I wanted to include a final app that is not for educational purposes, but more for keeping your kids and devices safe while they learn. A Virtual Private Network (VPN) is a service you can put on your devices that will protect them from being watched or compromised by the bad guys online. It’s a bit beyond the scope of the article, but if you’re interested, there’s a good explanation written by Secure Thoughts on VPNs. Whatever you do, just make sure that you’re staying safe while you’re online.

Are there any other apps that you’d like to share with your fellow readers that would be great for kids? Do you use any of the ones listed above? Please leave a comment below and tell us what you think!

About the Author: Caroline loves to see kids reading and engaged; something technology only rarely accomplishes on a high level. As a blogger for http://www.culturecoverage.com, she shares tips about internet safety and entertainment on a regular basis. She hopes that you manage to get some good recommendations from this piece!