Seriously Cool Back to School Accessories for Middle Schoolers 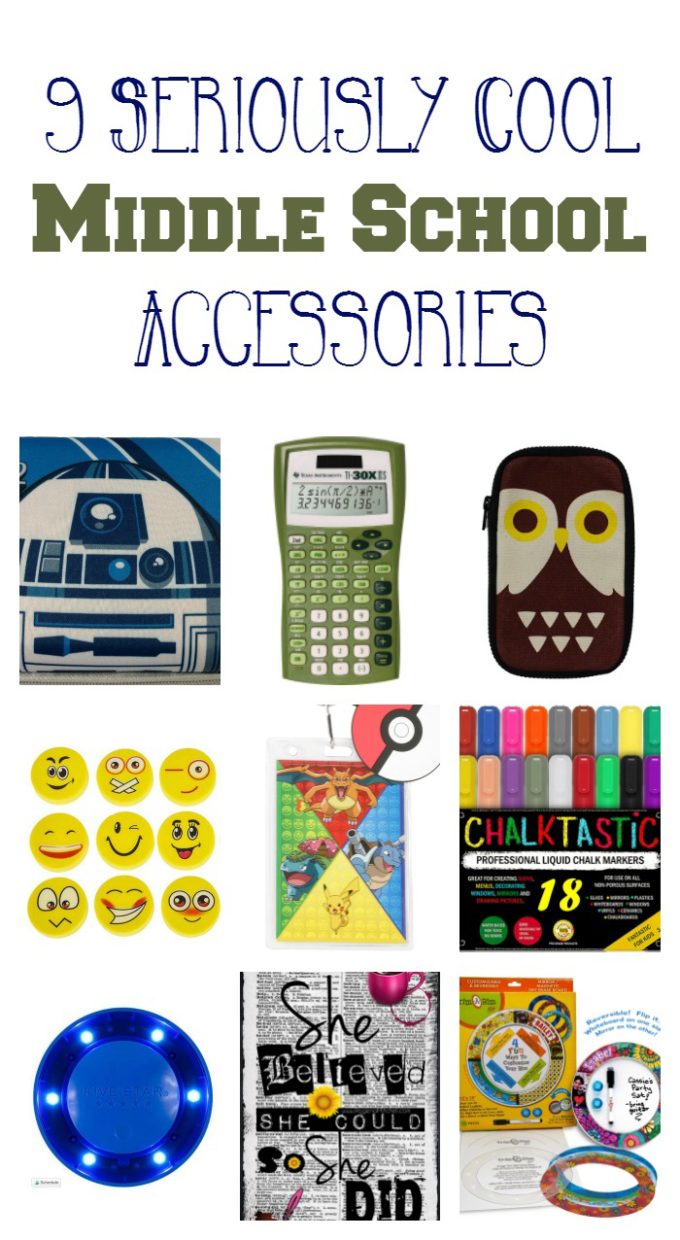 I am such a slacker this year with back to school season. Mostly because I don’t want summer to end. When it ends, I have to start getting up at 6am. Up until this year, Jake started school at around 9, which meant he got on the bus at 8:15. We prepped the night before and slept until the last possible minute, rolling out of bed at 7:30. Now he starts school at 7:15. What??? I’m not even going to go into how insane I find that and how it doesn’t allow for enough sleep for growing bodies unless you somehow manage to get your kid off to bed before the sun sets. School shouldn’t start before 8. End of discussion.

Anyway, because I’m so annoyed with this, along with about a thousand other things regarding my son’s district and the transition to middle school, I’ve kind of been putting off all the shopping. Not the most brilliant tactic, I know. So here I am, less than two weeks before school starts, and all I have so far are pens and pencils, thanks to the BIC post that I did, and insanely awesome study guides from Big Fat Notebooks. No backpack, no lunch box. No folders, notebooks, binders. No clothes. Oh geez, what is he going to wear??? I am really digressing, aren’t I? I’m assuming you came for the seriously cool back to school accessories I mentioned in the title. If you read all that ranting above, kudos to you for sticking with my through my tangent. I’ve been sick all week and I’m half-delirious, which leads to much rambling and whining. Who gets sick during the summer? It’s not fair! (Queue up those tiny violins, we’re having me a pity party!) Okay, on with the show. Now that I’m down to the wire, I’m shopping like a mad woman. Here are some of the coolest back to school accessories that I’ve come across so far. I have a boy, but I’m including a few for girls too because, well, because I secretly want them for myself. That’s how cool they are!

Seriously Cool Back to School Accessories for Middle Graders Jake has to start keeping his student ID on him now that he’s in middle school, so I need to get him a lanyard. Since he has a dress code, this is one of the few areas that he can really show off his personality. Pokemon is crazy hot right now, with all the Pokemon Go mania, so this one is right on trend. Although, I am thinking of getting Jake the Fallout 4 Vault 111 Lanyard too. He loves Vault Boy. does a pretty good job of that! is cute without being “cutesy.” It’s not too over-the-top, and looks roomy enough for the essentials. Just because they’re in middle school doesn’t mean kids have to leave behind the fun erasers. While they may not be into the cuddly animals anymore, you can still grab some cool styles for them. I love the Round Emoji Face Erasers

above. You get 72 of them for a decent price. These food erasers are pretty cool too! Amazon has tons upon tons of fun novelty erasers

. Just make sure to grab a few standard pink ones in case your tween’s teacher requires them. with LED lights. I remember trying to find stuff in my mess of a locker, especially in the deep recesses of a bottom one. Speaking of lockers, I’m not quite sure what to call these. Well, I mean, they’re called Trim-A-Rim Mini Size Magnetic Locker Mirror and Whiteboard

, but that was too long for a header. I don’t know that my son would be too into them, but they’re cool for tween girls! Also, did you know if you look up “locker accessories” on Amazon, a few pages in you get a result for a giant “storage and entertaining station with shelf”? Wow, lockers are much bigger these days! Whether it’s for a dry erase board or blackboard paint, these chalk markers

are just about the prettiest things ever. Yes, they’re probably designed more for teachers, but you know what? Who cares? If my son has these, he’s more likely to write notes on a white board. Which means he’s more likely to remember things. He can also use a dry erase board as “scratch paper” when doing math homework, and maybe it won’t be quite so boring. Or maybe I just want them and I’m making up reasons to buy them. I think every middle-grade kid (or all kids for that matter) needs a brilliant, fun sketch book. Even if your tweens aren’t into drawing, a book filled with quality blank paper gives them a chance to express themselves freely however they want. Middle school is all about rules and structure. They need some free space for creativity. It’s not really a journal, per se, but just a blank canvas for expression. I love this one Apparently, middle schoolers need scientific calculators. I have zero clue how to use these. Zero. At least I found some that aren’t boring black! The Texas Instruments TI-30X IIS 2-Line Scientific Calculator

come in all sorts of fun colors, like lime green and pink. So while I can’t help my son do much more than turn it on (maybe), I can at least get him one that he’ll like.

So now that I have a few accessories(or at least a cart full of stuff on Amazon), I just have to get moving on the basics like backpacks and clothes! It’ll be okay. I’ll pull it off. I’m a procrastinator by nature, I work better under tight deadlines.

Have you found any really cool back to school accessories to make the transition to middle school more exciting for your kids?