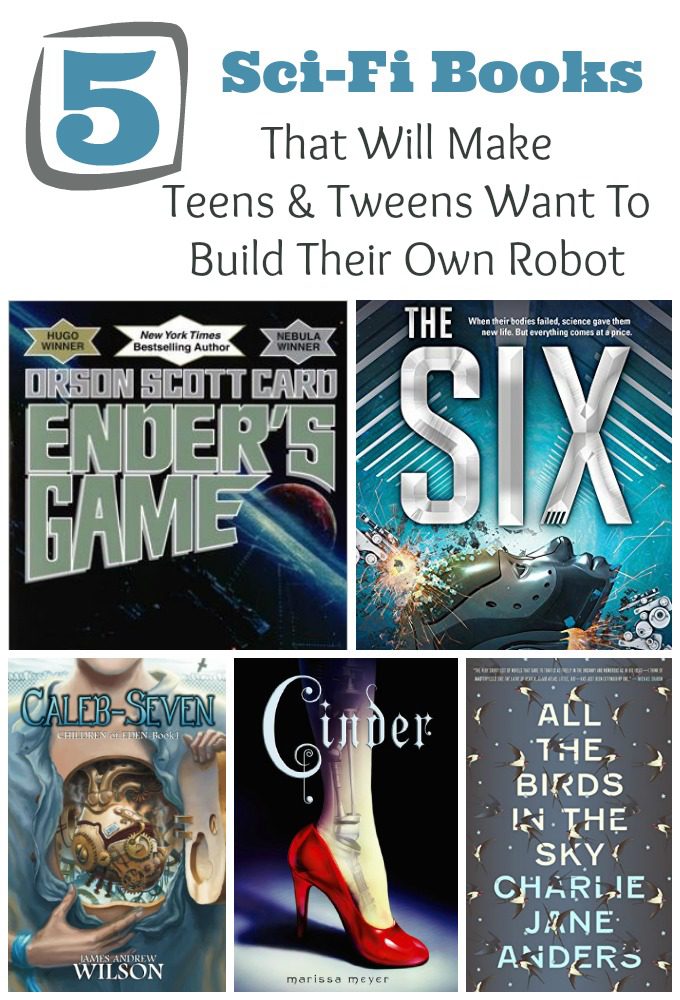 Finding the right books to inspire teens can be tough sometimes, but you know what almost always does it? Robots! Robots and artificial intelligence have been hot stuff as more and more places are pioneering programs for teens to try their hand at computer programming and engineering young! I’ve thrown together some really great reads that your teen is going to love if they like sci-fi, robots, and artificial intelligence. Most of these books have the world threatening to end and have dystopian themes also. (So if you liked books like The Hunger Games and Divergent, you’re going to like these books too!) These exciting science fiction books are just the ticket to get kids thinking about engineering, STEM, and human emotions versus artificial intelligence. Whether your teen loves tech or is just a fan dystopian reads, you are going to find a book on this list that they can’t put down. Check out my picks below!

Related: 5 Space Apps That Will Make You Want To Hop A Spaceship All the Birds in the Sky

When I saw this book described as unique and weird in all in good way, I knew this was a new book I wanted to pick up! Just published in 2016, this book is still new on the scene! The story is about two childhood friends who part ways when they are young for mysterious reasons. Patricia suddenly develops the ability to talk to birds and Laurence develops a two-second time machine. The book fast forward to their future where Laurence is an engineer and Patricia has attended the hidden school for magic. They are brought together again and must somehow face a secret that just may save the world.

Ender’s Game should be on everyone’s reading list, and was a really fast paced read. Ender’s Game is about a young boy named Ender who is taken from his home on earth as a young child and entered into a rigorous government battle school where young geniuses play mock battles within zero gravity. Meanwhile, the world is being attacked by aliens (The Buggers) and the only ones who can save the earth are those in the battle school Meanwhile back on Earth, Ender’s brother and sister who didn’t make it into the battle school have their own plan cooking. This book is the winner of both the Hugo and Nebula Awards and is part of a four-part series.

Cyborgs and fairytales? Stay with me because this book is crazily amazing. This is a fractured fairytale retelling of Cinderella set in futuristic China. An alien race is looming from above that the government is fighting. Cinder, a second class citizen but talented mechanic suddenly finds herself at the middle of the war with the aliens after her life becomes entangled with Prince Kai. Though there are a few elements similar to the original Cinderella story, Cinder is no typical fairytale heroine, and you won’t be able to put down this page turner.

Adam is a teen with muscular dystrophy who is terminally ill, and virtual reality games allow him to escape and do all of  the things he wishes he could so. Then an artificial intelligence program Sigma goes rogue and hacks into his game and threatens to kill him and take down the entire world! Adam becomes part of a select group of six terminally ill teens who take over weaponized robots to save the world! Adam is not your typical hero, and may be a difficult read at parts for those who know people who are terminally ill, but the book is a great read and the main character is a fighter. Adam is facing the frightening reality that robots could take over the world if they are not stopped!

So do you know of any other great young adult Sci-Fi books that feature robots or artificial intelligence that are fantastic reads? Have you read any of my picks? Tell me what you think down in the comments!