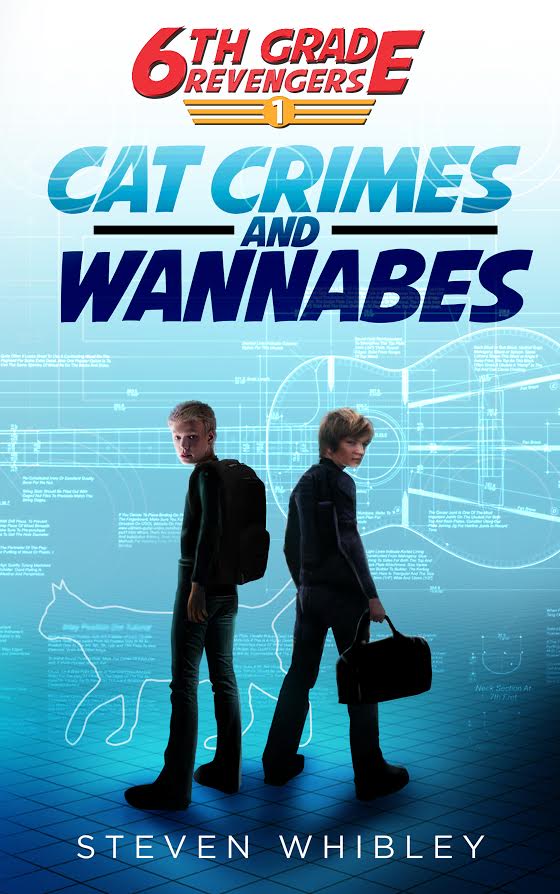 If your tween loves action, adventure and intrigue, he’ll really love today’s book blast!  6th Grade Revengers: Cat Crimes and Wannabes by  Steven Whibley is the perfect stocking stuffer for tweens. Read on to learn more about this awesome middle-grade book, then enter for a chance to win a $50 Amazon gift card or Paypal cash! Jared and Marcus aren’t like other 11-year-olds…they’re also Revengers. They fix problems and they’re awesome at it-at least, they will be if they ever get a chance to show off their skills. What they need is exposure. Luckily, they have the perfect target in mind: Jared’s sister’s boyfriend. He’s a jerky, wannabe rock star, a relentless bully and he smells like old gym socks.

Enough is enough. The tone deaf jerk’s days are numbered. There’s only one hitch: Marcus already offered their services elsewhere. A stray cat with serious aggression issues apparently has a whole neighborhood boarding up their windows. What the boys think will be an easy-money job quickly turns into a dangerous game of wits. The cat’s a monster. It takes all the ingenuity the boys can muster to deal with this beast.

Two targets at once. It’s time to prove themselves as the awesome after-school problem-solvers they know they are. That is, if their plan doesn’t backfire. Because they’ll either be feared fixers or a couple kids who can’t even take out a kitten.

Praise for the Book
“…funny, exciting and full of adventure.” 10-year-old reviewer

“…a delightful story, full of adventure and I would highly recommend it…” Amazon reviewer

One of my favorite TV shows was about a spy who couldn’t be a real spy anymore so he went around helping people with their problems. In a way, that was exactly what I’d done for Sky. She had a problem, and I fixed it. I wasn’t sure what that would be called, but there had to be thousands of people with problems—problems like evil bosses, jerk teachers or pain-inthe-butt sisters—who needed someone to help them deal.

I grabbed a notebook and pencil and started brainstorming all the ways I’d make it work. Eventually my brainstorm became a brain typhoon, or whatever it is when your imagination gets out of control. Brain tornado maybe. The ideas came faster than I could write them down. There was no limit to what I could do. Bullies would disappear from playgrounds. Mean babysitters would never sit again. The possibilities seemed endless.

Pretty soon it was after midnight and I had a notebook filled with ideas.

“Jared Moter: Avenger of the Little Guy,” I said to myself as I crawled into bed. No, avenger wouldn’t work. That was already a comic book and a movie. Revenge-inator? That sounded like a robot from a sci-fi movie. It had to be cool. Had to be catchy. “Problem Assassin?” I shook my head. I wasn’t really killing stuff and besides, assassins were cool in movies and video games but not in real life. I lay there staring up at the ceiling for a long time.

Just before I fell asleep, I found the right word.

Steven Whibley is a father, a husband, and the author of several middle grade and young adult novels. He has lived in Japan; volunteered in Thailand, Myanmar and Colombia; explored the ruins of Tikal, Angkor Wat, and Cappadocia; and swum with sharks in Belize. His novel, DISRUPTION, was a finalist in Amazon’s Breakthrough Novel Award, and GLIMPSE (an unrelated novel) was shortlisted for Foreword Review’s Book of the year award. He is represented by DGLM.
Website * Blog * Facebook * Twitter

Open only to those who can legally enter, receive and use an Amazon.com Gift Code or Paypal Cash. Winning Entry will be verified prior to prize being awarded. No purchase necessary. You must be 18 or older to enter or have your parent enter for you. The winner will be chosen by rafflecopter and announced here as well as emailed and will have 48 hours to respond or a new winner will be chosen. This giveaway is in no way associated with Facebook, Twitter, Rafflecopter or any other entity unless otherwise specified. The number of eligible entries received determines the odds of winning. Giveaway was organized by Kathy from I Am A Reader and sponsored by the author. VOID WHERE PROHIBITED BY LAW.