Make Movie Night at Home Special for Your Tween 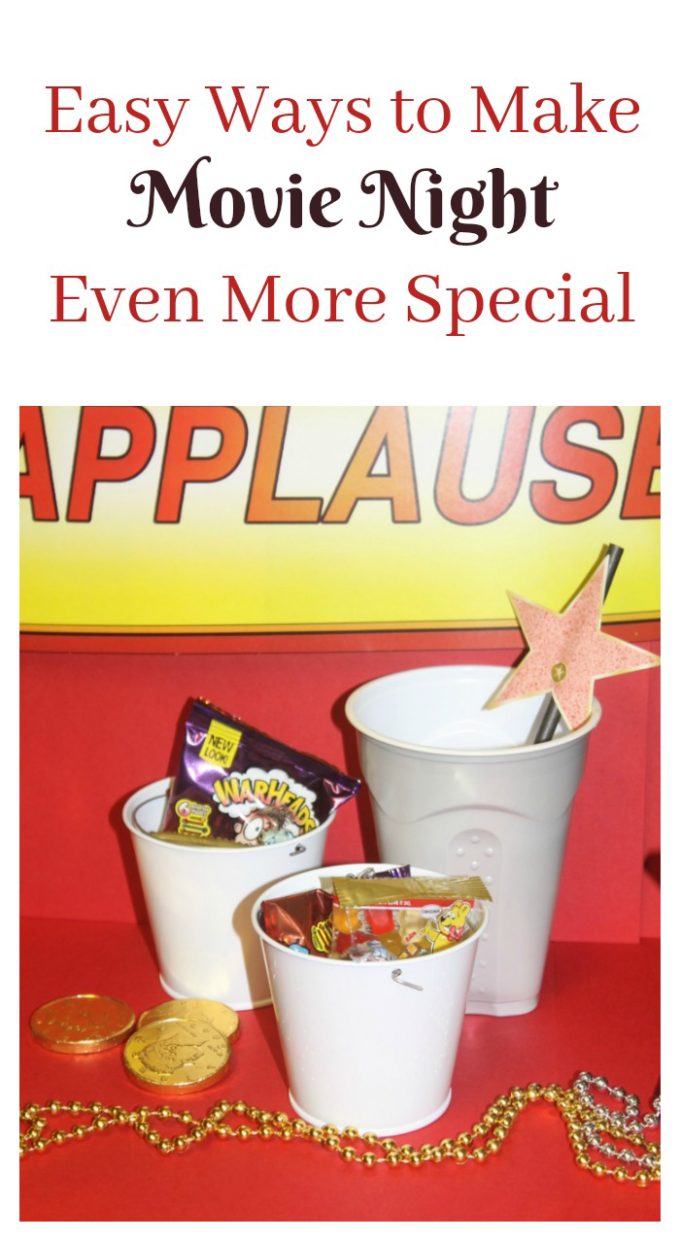 With award season underway, now is a great time to catch up on all those movies you didn’t have a chance to watch last year! We love having family movie night at home. As much as Jake and I enjoy going to the theater (we just saw Sing on Christmas, highly recommended!), sometimes it’s nice to just stay in and catch up on our “to watch” list. It’s definitely a lot more cost-effective! During my brokest years, movie night was the only thing I really had to offer Jake in the way of entertainment. For the cost of a bag of microwave popcorn, we could pull out old favorites, cuddle on the couch and still have a fun evening. Even though Jake is getting older and prefers to spend time with his friends online, he still asks me to have a movie night at least once a month. I like to try to make those nights as special as possible. While I don’t always go all out (okay, so I rarely go all out), every now and then, it’s fun to do something a little unexpected. Check out a few easy ways to make movie night more special for tweens!

Items for this post were provided by Oriental Trading Company. All opinions are my own. A good movie night starts with the snacks! I grabbed huge bags of bulk candy from Oriental Trading Company. Both Jake and my husband are crazy about sour candy. I can take it or leave it, so I got myself some chocolate gold coins (gold doubloons, as Jake calls them). If you’re planning to turn this into a movie-themed party, the coins make great little prizes or point counters for trivia games. I also picked up those cute little white favor pails (you’ll see them again later on in a Valentine’s Day craft). They’re so versatile! If you’re feeling really crafty, you can decorate them with silver and gold glitter paint or sharpies.

I like the idea of a variety pack of candy because movie night is about being a little indulgent. However, if I get the large movie-size snack boxes, we’ll end up eating way more than we should. This way, we feel like we’re getting a bunch of different candy, but without eating a ginormous amount. I ALWAYS get sick after we go to the theater. ALWAYS. Without fail.

I was going to be super duper industrious and make a ton of different gourmet popcorn. I had the recipe all bookmarked, bought these cute little popcorn containers and everything. Then I got the flu. I promised Jake that we will do that another night, so if it comes out cute, I’ll either update this post or give you guys a new one with those ideas. In the meantime, a few of the ideas I was going to try include:

I also made this yummy white chocolate chip pumpkin spice popcorn a while back that is super tasty! The best part of an award show is definitely the swag bag! Well, maybe not for the actors who actually take home an award, I’m sure that’s the best part for them. For the rest of the attendees, though, they get some pretty awesome stuff! I can’t afford a multi-million dollar swag bag for my kid (who can?), but I grabbed him this Movie Night Swag Bag. I love that you can buy individual bags already stuffed full of favors as well as the items that you need to make a bunch of your own at once. That little clapboard is actually a picture frame, I just haven’t had a chance to put a photo in it yet. Cute, right? Again, you don’t have to go crazy here, the idea is to just add a few inexpensive little treats that scream “red carpet.” Will most of this end up getting lost under his bed in two days? Of course! But we still made some memories with the stuff, and that’s worth it. In an age of selfies and youfies (I think I just made that up, but we need a word for when someone else is taking the selfie, right?), photo props are a quick, easy and super fun way to make any night special, including movie night. These were actually the biggest hit of all. You’d think the candy would have been the big draw, but Jake had so much fun with the props! Usually, I have to bribe him to take pictures these days. Literally, I pay him a “modeling fee” per shot that I use. He loves reaping the benefits of being a blogger’s son but doesn’t like having his picture taken too often anymore. It’s a tween thing I guess. This time, though, he actually picked out the props and suggested fun ways to use them.

Like I mentioned, I got all the stuff for this fun movie night at Oriental Trading Company. I’m happy to partner with them because I’ve been a long-time shopper and fan. I still remember planning Jake’s first birthday party and going WAY overboard picking out Under the Sea themed stuff from their online store. If you’re looking for great deals, make sure you check out their coupon page before you shop for all the latest sales.