5 Ways to Get Yourself Out of a Really Awful Funk 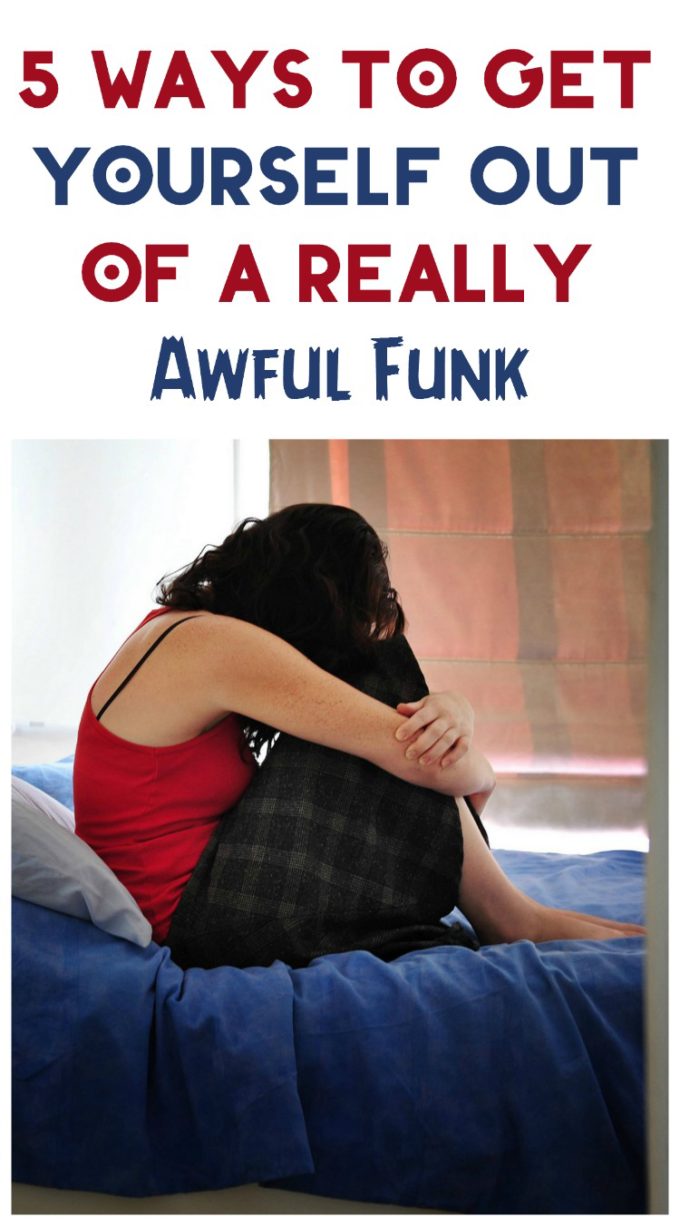 I am in the worst “funk” of my life. Seriously, I have to really force myself to even get moving lately. The last year has been just plain awful. It started in February of 2016 when we had to put Tasha, our German Shepherd, to sleep. She was 14 and we knew it was coming, but it still hurt like crazy. On July 4th, my 14-year-old Lab Collie Maia decided she couldn’t live without sissy anymore and went across the rainbow bridge to join her. A bunch of other miserable things happened, then the worst came. We lost my aunt to cancer right before Christmas. Since losing her, I’ve been incredibly depressed. I can’t seem to pull myself out of it. Then, as if the universe was just looking for a way to kick me when I was down, my 10-year-old dog, Cooper, died last week of heart failure. When we lost the girls, it was almost expected. They were older than most large breeds live. Cooper was a kick in the teeth. My son was devastated since Coop was “his” dog. If ever two beings epitomized “a boy and his dog,” it was those two.

I could go on and on with all the things that have happened in the last year, but I’m sure you’re dealing with your own issues, some probably far worse than mine. I think we all are. Misery seems to be going around. I feel like the entire United States, if not the world, is in the midst of the worst funk ever. So what can we do to get out of it, aside from bury our heads under our blankets for the rest of the decade? I don’t have all the answers, but here are a few things that I’m trying.

5 Things You Can Do to Get Out of a Funk

One of the best things you can do to get yourself out of a funk is to help someone else. Volunteering is incredibly rewarding if you’re an extrovert. For people like me who freak out at the thought of being surrounded by strangers, though, there are plenty of other ways to help out. Use your social influence to share news about a cause that you’re passionate about. Donate your writing or graphics services to help out a local charity. Try this right now: make a list of a few causes that really get you going (for me, it’s child hunger, animal welfare, cancer research, and finding a way to end human trafficking). Focusing on one or two to start with, look for websites that work towards resolving the issue, then click on their “how you can help” section and find one thing that you’re comfortable doing, then do it.

Create a Routine…and Stick to It

If I didn’t force myself into some sort of routine, I’d spend the whole day hiding in my bathroom. I am my family’s sole income provider, so I have no choice but to drag myself out of bed and get to work. By establishing a morning routine, I can push my brain into “work mode” almost on autopilot. I drink my coffee, check the news (which probably isn’t the best idea for someone in a funk, because it’s never happy news), check my emails, then go down my to-do list for the day. I also give myself a set “quit” time and do everything in my power to stick to that. If my brain knows that we get to finish up and go back to hibernating at a specific time, it’s a little easier to make it through the harder parts of the day.

Never underestimate the power of talk therapy. If you don’t have time (or the energy) to leave your house for regular therapy sessions, find a friend who you can vent to. Just make sure you give them the chance to vent in return. You can also join a Facebook group of people who are going through the same thing. If you REALLY don’t feel like you can talk to others about it (or if you’re just a really private person and don’t want to), write it down. I’m not much of a journal person these days, so I write letters to people that I’ll never send. Just the act of dumping all my emotions from my brain onto a page gives me measurable relief.

Give Yourself Permission to Zone Out

I’ve read 17 books since the New Year began, and all of them fall under the category of “mindless entertainment.” I’ve also been binge-watching The Vampire Diaries because again, it’s mindless entertainment. Once I finish up that series, I’ll probably binge on Grimm, since that’s also ending this month. While I’d certainly prefer to do something a little more thought-provoking, I’ve given myself permission to just zone out and enjoy mindless entertainment. I think we put a lot of pressure on ourselves to act like extreme intellectuals all the time. That’s why we call shows like The Vampire Diaries “guilty pleasures,” because we feel guilty for watching that instead of a nice documentary on the rain forest.  I already know I’m a smart person. I don’t need to prove it by reading War and Peace, and neither do you.

Learn Something New Every Day

When I was in my worst years of depression, I used to pick a subject and dive into it full force. Granted, this was before I had a son and a job, so I could spend the entire day reading about plagues and the effects of sleep deprivation! These days, my “learn something new every day” activities are limited to looking up a new word or reading a news article on a subject that interests me. Why does this help you get out of a funk? For one thing, it makes you feel like you’ve accomplished something. For another, it gives you a chance to find new passions! Who knows, maybe you’ll decide you love language so much that you want to learn a new one, or perhaps you’ll find out that ancient history interests you enough to go back to school to become an archeologist. Anything is possible.

Getting out a really bad funk isn’t easy. If it was, no one would suffer from depression, right? Still,