20 Harry Potter Books Every True Fan Should Own 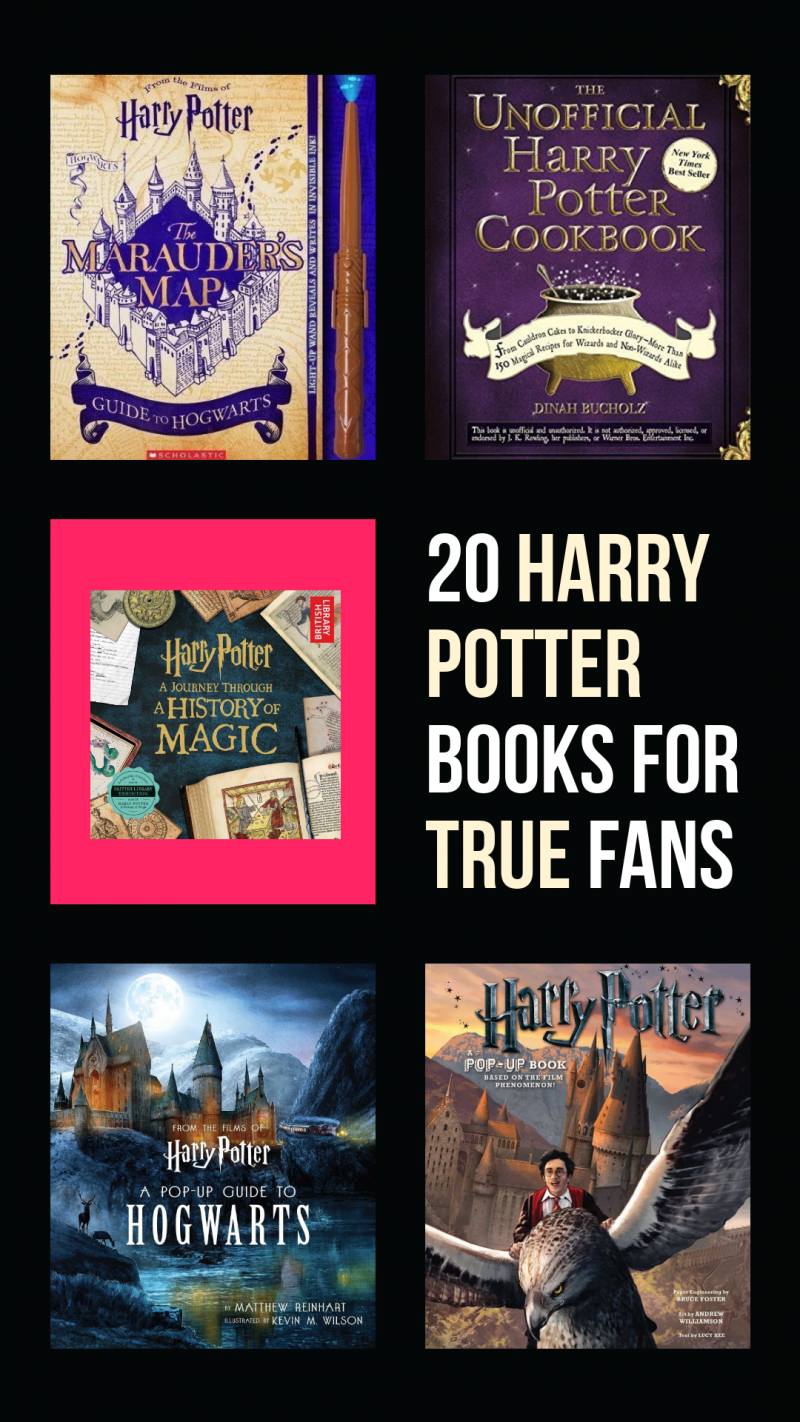 Did you know that this year is Harry Potter’s 20th Anniversary in the US?  Scholastic first published Harry Potter and the Sorcerer’s Stone in the United States back in 1998. If you’re as obsessed with The Boy Who Lived as I am, you’ll want to grab these 20 must-have books for true Harry Potter fans! Aside from the actual Harry Potter books, there have been quite a few other books that complement the series. Some of them are “official” and some are more along the lines of fan-made works. I have a good mix of both, and I’m planning to grab a few more for me and my son to read together this summer. Check out the Harry Potter books that top my list of must-haves!

*Affiliate links included below. If you make a purchase through these links, I earn a tiny commission at no extra charge to you. Thanks a bunch!

and re-read the entire series with your family this summer! If you really want to go all out, you can get the boxed set in a trunk! On a tight budget? Sign up for Kindle Unlimited, all of the books are available there! Want to get into Hogwarts? You’ll need to practice! Pick up The Unofficial Harry Potter Spellbook: Wizard Training

and get started! Includes over 200 spells from the movies and books on beautiful pages designed to look like a real wizard’s book.

: From Cauldron Cakes to Knickerbocker Glory for Christmas a few years ago, and I love it. There are quite a few Harry Potter cookbooks out there, but this one is definitely my favorite!

includes: Fantastic Beasts and Where to Find Them, Newt Scamander’s master work on magical creatures; Quidditch Through the Ages, a comprehensive history of the game and its rules; and The Tales of Beedle the Bard. The books are all written by JK Rowling herself, making this official collection a must for any fan!

5. Harry Potter: A Journey Through a History of Magic Did you know that the British Library has a special Harry Potter display? In Harry Potter: A Journey Through a History of Magic

takes you on an enchanting journey through the world of magic that inspired Harry Potter. From  unseen sketches and manuscript pages from J.K. Rowling to real-world magic wands, this enchanting book isn’t just entertaining, it’s educational! is a fabulous way to celebrate your love of all things Hogwarts and relax your mind to boot! There are a bunch of them, actually, but the one linked is my favorite. It has 96 pages. This gorgeous hardcover book is filled with fun activities and pictures from all of the Harry Potter movies plus Fantastic Beasts and Where to Find Them. It includesan 8-page fold-out Wand and Spells Guide and full-page posters. Have a hard time remembering who’s who in the Harry Potter Universe? Harry Potter: The Character Vault

is a full-color compendium covers all the key players in every one of the Harry Potter movies. It’s filled with never-before-seen photographs and illustrations of everything from costumes to weaponry! The Marauder’s Map Guide to Hogwarts

is releasing by Scholastic later this month, on June 26th. It looks pretty awesome! First, you can relive the magic of the movie with the guidebook to the secrets of Hogwarts. Then, when you’re done, you can open the wand, which is an invisible ink marker and light. The light reveals more secrets, while the pen and the blank parchment at the end of the book lets you create your own map. I’m not one to insult people, but sometimes bullies just have it coming! Even if you always manage to keep your tongue, the Unofficial Harry Potter Insults Handbook

is still big fun for a very small price. The independently published book is only 64 pages, but it’s worth it. In honor of the 20th Anniversary, you can now get the first book in four different editions: one for each Hogwarts House. I think the Slytherin Edition is pretty cool looking, don’t you? These stunning editions will each feature the individual house crest on the jacket and line illustrations exclusive to that house. Extra content will include fact files and profiles of favorite characters, and each book will have sprayed edges in the house colors. Also publishing this month, for the first time you can take an olfactory adventure through Hogsmeade’s most popular candy shop! Honeydukes: A Scratch & Sniff Adventure

is short at 24 pages, but each beautiful page is scented! YUM! is a one-of-a-kind tour through the beloved wizarding locale. It’s packed with fun inserts that take you on a tour of the cobblestone shopping street. looks more like a children’s activity book (okay, so it IS for kids), it’s also big fun for adult fans! Use the wooden stylus to scratch the pages and uncover the Golden Snitch, find someone hiding under the Invisibility Cloak, and reveal a shimmering Patronus-just like magic! I used to love these scratch art things when I was a kid.

15. The Psychology of Harry Potter: An Unauthorized Examination Of The Boy Who Lived If you’re as big of a psychology nerd as me, you’ll love The Psychology of Harry Potter: An Unauthorized Examination Of The Boy Who Lived

! In it, leading psychologists delve deep into the character’s mind to answer the questions on our minds!

How does a Quidditch newbie function?… By winging it! Think that was funny? You need The Unofficial Harry Potter Joke Book: Great Guffaws for Gryffindor

! It’s filled with 176 pages of clever gags and puntastic jokes for kids of all ages (and kids at heart). Like the Character Vault mentioned above, Harry Potter: The Artifact Vault

takes you on a behind the scenes journey to learn more about the scads of artifacts mentioned throughout the movies. Discover the movie magic behind things moving pictures in newspapers and vicious attack books! was designed by best-selling pop-up engineer Matthew Reinhart! Did you know there was such a thing as a pop-up engineer? It also features art by Andrew Williamson, concept artist for all eight movies. It’s only 12 pages, but there is a ton of detail throughout those pages. Already have #18? This Harry Potter: A Pop-Up Guide to Hogwarts

releases later this year (in October). Once again, Reinhart brings his pop-up expertise along, this time to give us a complete inside look at the most magical school in the universe. Each pop will include insightful text about Hogwarts as seen in the films, making for a must-have collectible for fans of the wizarding world.

Honestly, the pre-order price seems a bit high compared to the other pop-up book, and the description says it’s only 5 pages, so I think I would wait to see if the cost comes down once it releases. features multilayer dioramas that capture beloved moments from the films. This one releases in October of this year, just in time for the holiday season. It would make a great gift for your favorite Harry Potter fan!

There you go! 20 awesome Harry Potter books that every true fan needs! Get them all or just the ones that fit into your budget. If you have to pick just one (aside from the actual Harry Potter novels), I’d go with the cook book. It’s so much fun to recreate recipes from the Potterverse!

What are your favorite Harry Potter books, aside from the actual novels? Tell me all about them so I can check them out!