50 Brilliant YA Books to Put on Your Summer Reading List 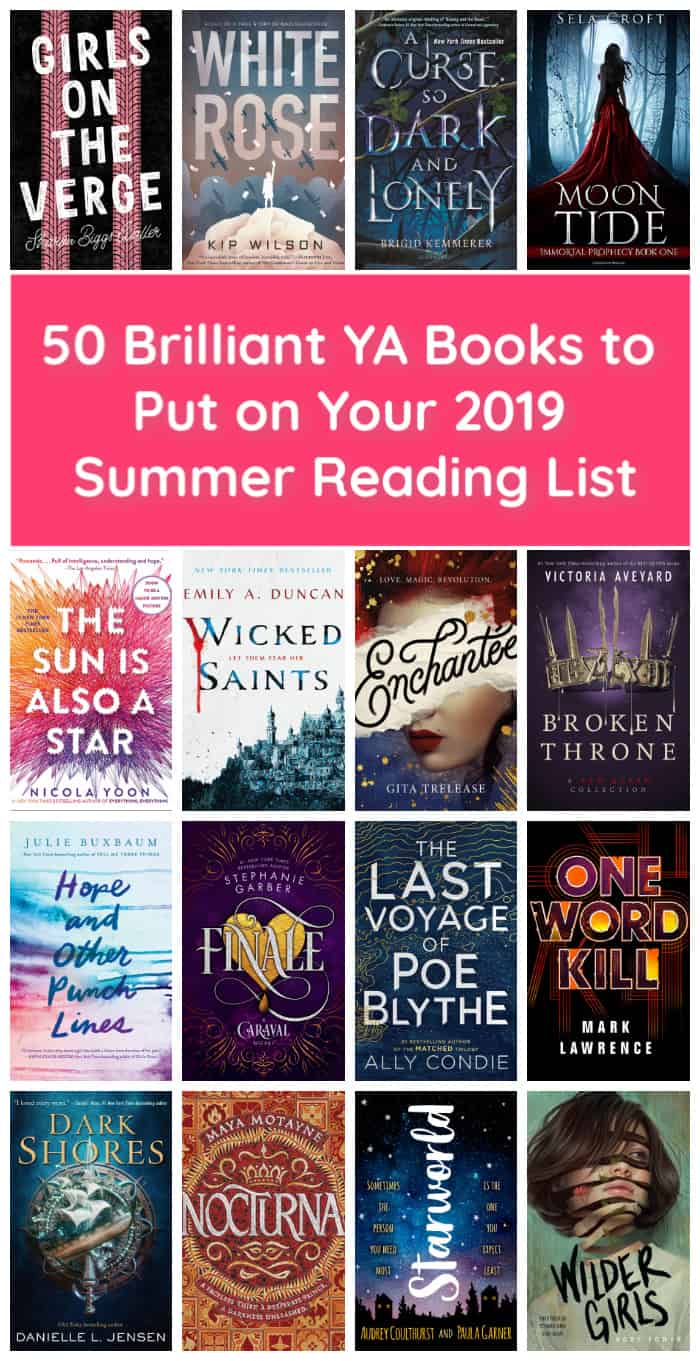 Can you believe that it’s already almost time to start planning your summer reading list? I am lining up my TBR pile as we speak! Read on to find out which young adult books I can’t wait to read! There’s just something about summer that entices you to stay up past your bedtime lost in a good book, isn’t there? Whether you need a stack of great reads for your vacation or just one or two picks for a lazy weekend, if you love YA and teen books, you’ll want to add these to your summer reading list!

*One quick note before we start: the links below are affiliate links. If you make a purchase through them, I earn a tiny commission at no extra charge to you.

Some of these books are part of a series (actually, most of them probably are, since series are where it’s at these days) and they may not be the first one in it. I’ve noted the series name, though, so you can start from the beginning.

The majority of these books either came out in the last 90 days or are coming out before the end of the summer. I’m breaking this up into chunks of 5, with a preview of my top pick in each group. That should keep it from getting too overwhelming.

It’s tough to choose just one of these to feature, but I’m going with Wicked Saints because it’s probably the one that the fewest people have heard of at this point. The Yoon and the Lippincott books are becoming movies, and just about everyone knows who James Patterson.

Since this is Duncan’s first book, I feel like she needs the extra support the most. Plus, Wicked Saints sounds absolutely, well, wicked!

The Lost by Natasha Preston is first on my TBR pile out of the group above. While I usually lean more towards YA paranormal or fantasy, the premise of this thriller intrigues me. It’s about two teens trying to find out why other teens in their town keep vanishing. The search leads them to a creepy house with a very “escape room” vibe. I haven’t read a good mystery in a while, so I’m looking forward to this one.

If you want a classic, The Near Witch is a republication of a book that’s been OOP for a while, making it both new and old!

Another hard group to choose a favorite from, but I am definitely reading A Question of Holmes! I love Cavallaro’s wry and witty version of Sherlock Holmes (this time Holmes is a teenage girl).

The Last Voyage of Blythe Poe is also high on my list! I loved Ally Conde’s Matched series, so I can’t wait to see where her talents take her this time.

The Immortal Prophecy series is waiting for me at the post office as we speak, thanks to the author. I’m really looking forward to reading it because I love anything that has to do with Greek mythology, and I’m especially fond of the Persephone myth.

If you like poetry, White Rose is a good choice. It’s a poetic chronicle of teens and other young people standing together against brutality in a nonviolent way. It’s supposed to be very touching.

Although it’s out of my usual genre, I’m really looking forward to checking out Emergency Contact. It’s sort of the opposite of a meet-cute story, with two college Freshmen finding love in each other without actually ever seeing each other face-to-face. It sounds like a fun beach read!

Girls on the Verge also sounds intriguing. On the surface, it’s a story about teenage pregnancy. At its heart, though, it’s about girls taking care of each other. Fans of books like Boys on the Side will like it, I think, even though it’s more about teenage girls than adult women.

I’ll be honest, I’m not a fan of the Caraval series. I really wanted to love it. I even preordered the first book and was so disappointed when I couldn’t even get halfway through it. The writing style just didn’t do it for me. Still, I know that my opinion isn’t the popular one, so if you loved the series, you’ll want to grab this one.

As for me, I’ll be reading Sky in the Deep. It’s being hailed as “part Wonder Woman part Vikings.” It sounds like a great read!

On the fantasy front, I’m adding Shadowspell Academy to my own TBR list. It’s hailed as a cross between Harry Potter and the Hunger Games. I don’t think the premise sounds anything like Harry Potter. I mean, just because a character goes to a magic school doesn’t make it a Potter-like tale. Still, the premise sounds interesting: a girl disguises herself as her brother and takes his place in a mandatory magic academy to keep her family from getting killed.

One Word Kill sounds like something my son would really like. It’s supposed to be Stranger Things meets Ready, Player One, with a strong mystery angle.

At the top of my list, Killing November is a thriller centered around an elite boarding school where teens are trained to become assassins, spies, and master manipulators. The problem? November doesn’t exactly feel like she fits in. When another student is murdered, eyes turn to November, and she has to prove her innocence AND keep herself from becoming the next victim.

For Holly Black fans, you’ll want to grab The Modern Faerie Tales collection. The special edition includes all three of the series’ books in one fantastic set.

If you’re looking for a historical fiction book that takes a lot of liberties with history, Enchantee is a good choice. It takes place during the time of Louis XVI and Marie Antoinette, so it has the historical angle. At the same time, it’s filled with magic, making it a good fit for those who like fantasy.

Have You Seen Luis Velez? is one I’m recommending to my teen son. In an age of unbridled hatred that seems to be getting worse every day, it feels like a very important read. The story follow Raymond Jaffe, a boy who feels like he doesn’t belong anywhere. His only friends are a feral cat and an elderly woman who survived the Holocaust and finds herself alone after her caretaker vanishes. In a neighborhood filled with hate and bigotry, Raymond helps her see that there’s still plenty of good in the world.

Every YA summer reading list needs a fabulous love story, and Opposite of Always sounds perfect for filling that need. It’s your typical love story: boy meets girl, boy falls for girl, girl dies, boy finds himself back in time at the moment they met and tries to prevent her death. Okay, not so typical, and that’s what I love about it!

Wilder Girls also sounds brilliant. It’s supposed to be a feminist Lord of the Flies type novel about three boarding school girls stuck in quarantine, and the things they’ll do to find out exactly why they’re being confined.

With everything from fantasy and sci-fi to mysteries and coming-of-age stories, you shouldn’t have a problem filling your own summer reading list out with these fantastic YA reads!

What’s on your 2019 summer reading list? I’d love to hear your recommendations!