10 Things You Should Never Say to a Person in Pain

There are just some things you should never say to a person in pain. Even when said with good intentions, they still hurt. Since you’re here, I’m going to assume that causing more pain is the complete opposite of what you want to do. So in that case, please keep reading. 🙂 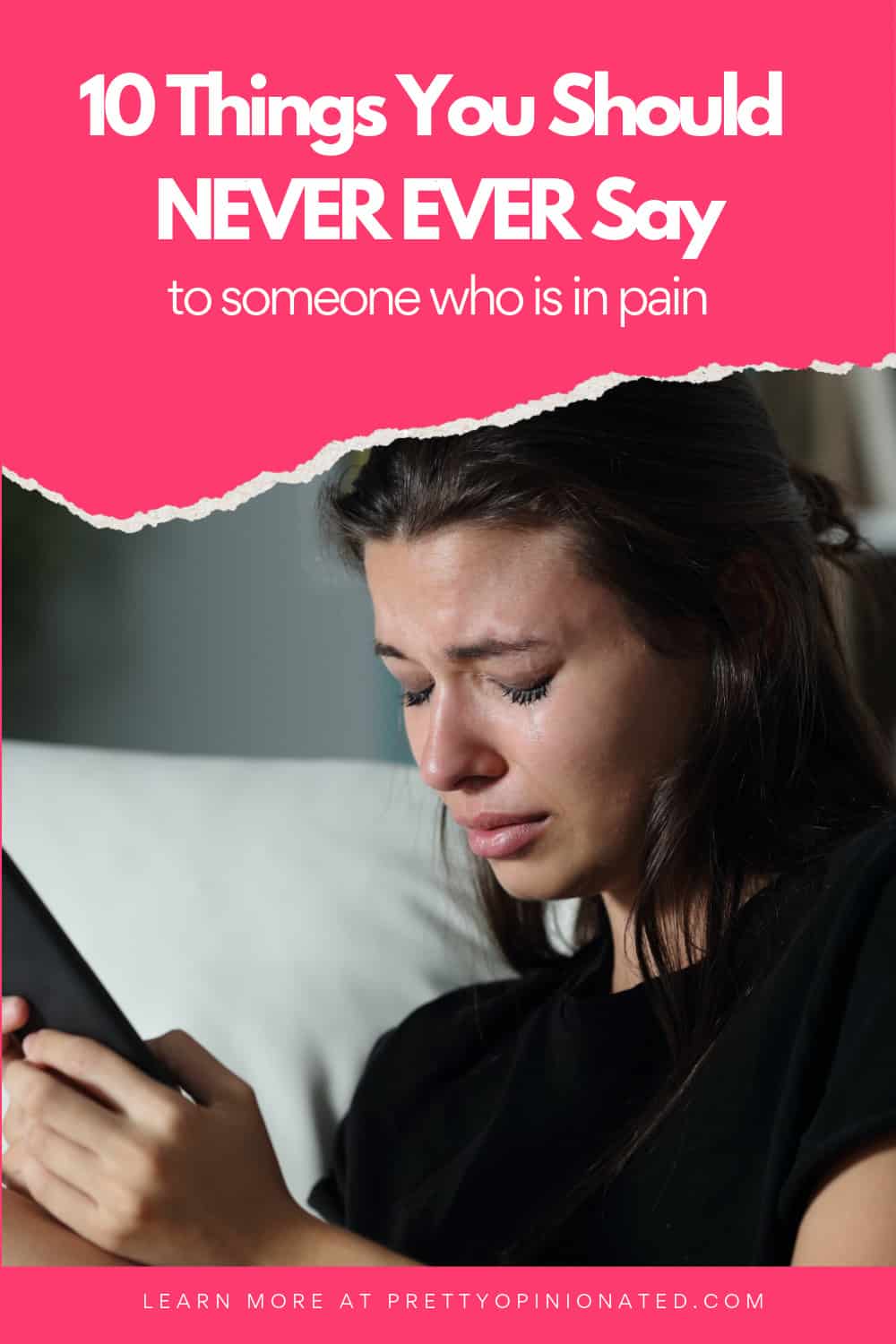 The world is an incredibly painful place right now. I mean, it’s painful all the time, but 2020 is particularly brutal so far. Millions upon millions of people are crying out in real, raw, heartbreaking pain. It’s often hard to find the right words to help ease that pain or- at the very least- let your loved one know that you’re there for them. Even with all of my years of experience as a writer, I struggle to say the right thing.

I’ve also spent most of my life on the other side of the equation in one or more forms of both physical and emotional pain. I know how powerful words are, how they can either soothe or slice. I’ve said the wrong things. I’ve had the wrong things said to me. Intentions are always pure on both sides. Good intentions may dull the edge, but even a blunt sword can still gut you. So, I make it a point to be conscientious of my words, to think about how I would feel if they were said to me.

Things You Should Never Say to a Person in Pain

1. Everything happens for a reason

Let’s start with one of my least favorite cliches of all time- everything happens for a reason, which is usually followed by some sort of implication that a higher power planned all of this out. First, not everyone believes in god, fate, or some sort of master plan. So, unless you know that the person is deeply religious and finds comfort in the idea of a higher power planning out everything, don’t say it.

Second, even when I still believed in god, I found this statement incredibly painful. I heard it often during my six years of struggling to conceive. I know those who said had good intentions, but the last thing I wanted to hear was that there was a higher power putting me through pain and suffering for “a reason” or as part of some sort of “grand plan.

2. Everyone feels this way (also, I know how you feel)

Anything that implies that everyone else goes through a similar painful experience at some point is just unhelpful, sorry. Yes, I know that a great many people have anxiety, get depressed, suffer losses, struggle financially or heck, even stub their toes. However, nobody- not a single other person on earth- feels MY sadness. No one else on earth feels YOUR loss. Not a single other living being has MY toe. We all feel our pain in our own ways. You may know how a similar experience made YOU feel, but no, you don’t know how I feel.

Saying that everyone goes through this, or everyone feels that way, etc just feels like the person saying it is blowing me off. Let me give you an example. Say you notice that I’ve been crying and ask me why. I tell you that I’m just feeling so overwhelmed and tired of being poor. You then say, “Everyone is feeling that way right now.” What your good intentions mean is “You’re not alone in your pain.” What my pained heart hears is, “You’re not special.”

I don’t mean the legit, “please, tell me about it, I’m here to listen” way, hence the exclamation point. Pretend that you and I are good friends for a moment. I call you to say hi. I notice that you sound like you’ve been crying. I ask what’s wrong. You tell me that you’re stressing over bills and you don’t know how you’re going to pay your rent or keep your lights on this month. I reply with “Tell me about it! I’m so broke, too!” How would you feel? It’s almost like saying, “Well, enough about your pain, let’s talk about mine!”

Saying “tell me about it!” is fine when you and your friend are just hanging out sharing “war stories” and letting off steam. I rant to my friend all the time. I tell her I’m sick of being broke, she says, “tell me about it!,” and we go back and forth complaining about things. There’s a time and place for ranting. When one of us is literally on the verge of a nervous breakdown over finances is NOT that time.

4. It could be much worse

Saying “it could be worse” doesn’t help someone in pain. In fact, it pretty much just serves to make them feel guilty or ashamed for being upset over something that isn’t literally the worst thing on earth. Yes, I know that some people don’t have to worry about rent because, hey, they don’t even have a home. Yes, I know that some people don’t worry about back pain because, hey, they’re paralyzed and can’t even feel their back. It doesn’t change the fact that I’m worried about keeping a roof over MY son’s head. It doesn’t lessen the pain from MY back.

We are all entitled to feel how we feel and not be shamed for it because it’s not literally the worst thing ever. Besides, if you think that way, think that someone shouldn’t worry because “things could be worse,” then basically you’re saying that exactly ONE person on this entire planet has the right to worry or be upset. After all, there can be only ONE person who actually has it worse than everyone else, right?

5. You’re being too sensitive/ Can’t you take a joke?

So, you go and put your foot in your mouth. You say something that causes another person even more pain. Now, you have two choices. A- you can genuinely apologize and try to do better. B- you can get defensive and resort to  “Can’t you take a joke?”

If someone in pain tells you that something you said hurts them more, please, choose option A, even if you don’t understand why they’re upset or even if you were “just trying to lighten the mood.” Also, when you apologize, don’t say, “I’m sorry you took it the wrong way.” Seriously, that’s a craptastic apology.

6. You’re over-reacting/ It’s not the end of the world

I can’t tell you how many times I’ve heard this from an ex who, among other things, stole from me, then had the nerve to say I was over-reacting when I confronted him on it. I’ve heard “it’s not the end of the world” way too many times, too. You know what? Just like I know it could be worse, I also know that the cause of my pain won’t lead to the destruction of the planet. It still hurts. If you can’t sympathize, then walk away.

7. This will make you stronger

What doesn’t kill us makes us stronger, right? Sure, maybe we’ll come out on the other end feeling like a superhero for managing to survive. It doesn’t help right now, though. I don’t want to be “stronger.” I want to be happy, or healthy, or less terrified.

Plus, some experiences don’t make us “stronger.” They break our hearts, they traumatize us, they haunt us. Strength isn’t a fair trade for surviving the loss of a loved one taken too soon or having our hearts ripped out, or suffering at the hands of someone that we trust. Sorry, I know the intention is pure, but you know what they say about good intentions.

8. Implications (or directly saying) that their own actions led to their pain

I am so sick over this new trend of digging up people’s old social media posts after they die and saying, “Look at this cautionary tale, they have no one to blame but themselves.” For example, a “Covidiot” spouts off about conspiracy theories, throws tantrums about wearing a mask, and acts like a jerk about the whole thing…then dies two weeks later. His heartbroken family shares the news about their loss, only to get bombarded with viral “cautionary tales” that throw the person’s past words in their faces.

Make no mistake about it, you’re not hurting the guy who died. Um, he’s dead, remember? This is a total jerk move. I’m sorry. I’m right there with you in being angry, frustrated, and just plain baffled by the COVID deniers. Turning him into a meme, though, it’s cruel to his family. So, before you throw out a “you only have yourself to blame,” ask yourself, is cruelty your objective?

This ties in with that last one, and it should be a no-brainer. I don’t care if you did tell them so, throwing that in their face is like saying, “well, you deserve what you got because you were too stupid to listen to me.” It makes you sound like all high and mighty, not sympathetic. Please, don’t ever, ever, ever say this to a person in pain.

Look, if you clicked on this post, then obviously you care about the impact your words have on loved ones in pain. Your intentions are pure, and it’s hard to know the right thing to say. Remember, though, that words have very real power. If you’re struggling with the right ones, just stick to “I’m so sorry.”

Do you disagree with any of these things to never say to a person in pain, or think of any I missed?