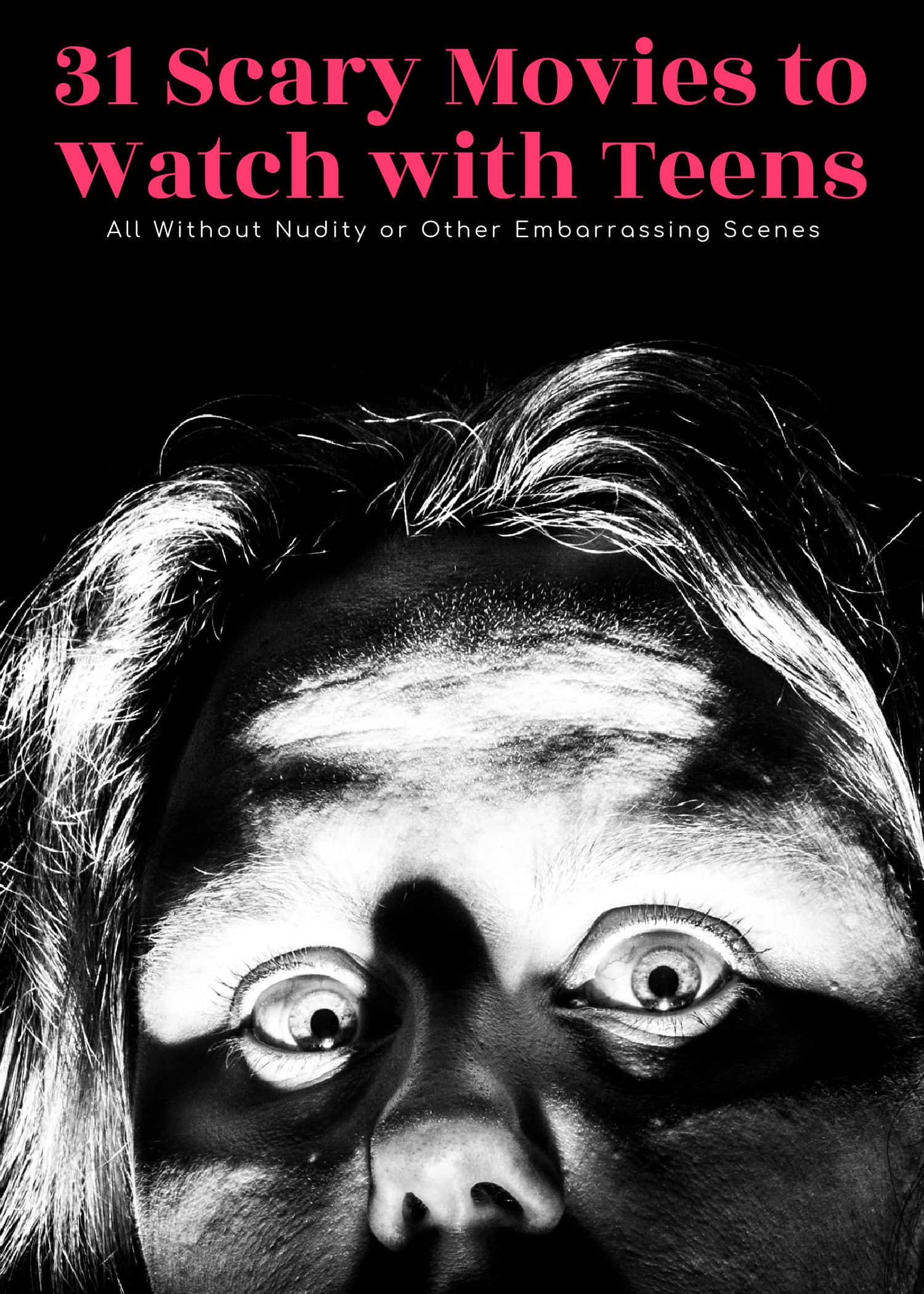 Let’s be honest, scary movies throw in a lot of gratuitous nudity and what not that makes for some pretty awkward moments when you’re watching them with your teen. The 31 spooky flicks below offer up plenty of horrifying moments, yes, but none of them are horrifyingly embarrassing for you or your teen. Check them out!

Quick note: when I say “teen,” I’m thinking along the lines of 15+. If you’re looking for something a younger crowd, check out my list of scary movies for tweens rated PG-13 and under.

My son is 16 and he’s pretty much allowed to watch whatever he wants (aside from a few obvious exceptions). That said, there are some scenes in movies that really make him uncomfortable when he’s watching them with me. Heck, even at 40+, I feel awkward watching those scenes with MY mom, so I know how he feels.

These scary movies below are free of awkward nudity or sex scenes. However,they may be gory, violent, or contain other things that you personally don’t approve of. So, I’m including a link to the IMDB parent guide for each to help you decide if it’s “clean” enough for YOUR teen. I’m also including the trailer, rating, IMDB description, and where to watch it for each one.

FYI, this post includes affiliate links. If you buy anything through them, I get a small commission at no extra cost to you. Movies are in no particular order. I started with most recent, but then jumped around towards the middle as I remembered movies to include.

This movie freaks me out, mostly because I know I’d die if I had to be completely quiet! While it does feature a pregnant woman giving birth, you don’t actually see anything.

I can’t actually watch this one with my son because I am freaking terrified of clowns, but for those without coulrophobia, it’s fairly clean as far as nudity and sex go. It is violent and gory enough to earn an R rating, though.

If dolls don’t already creep you out, they will after watching this one! It’s the sequel to Annabelle, which is also pretty teen-friendly.

Who knew a Parker Brothers board game really CAN contact the dead?

I blame this movie for all those nausea-inducing “shaky cam” flicks that followed. If you can stomach that, though, the plot itself was pretty good and creepy.

While it only scored a 6.6/10 on IMDB, this one is great if you love super-creepy space movies (which I do).

This is probably one of the scariest Halloween movies I’ve ever seen. Technically, it came out before Annabelle, but Annabelle is actually a prequel to it. So you may want to watch it first if you’re having a Conjuring series movie marathon.

It’s probably the cheesiest movie on this list (and that’s saying a lot, since horror movies in general practically ooze cheese), but as far as embarrassing scenes go, it’s also among the mildest.

Yeah, I know, it’s not exactly a terrifying horror movie, but it’s such a fun flick! We’re huge Jack Black fans here. Plus, it’s probably one of the few on this list that are appropriate for young teens.

This was one of my favorite horror movies to come out in the last decade. I prefer movies that are creepy without being too gory.

I’m not really into zombies, but I guess I’m in the minority there since this was one of Brad Pitt’s highest-grossing films.

If you and your teen like zombies but don’t really want something absolutely terrifying, this one was actually cute (and I say that as someone who hates zombie movies).

I really liked this one because it wasn’t at all gory. I prefer movies that are creepy or spooky versus over-the-top violent.

NOT good for anyone who can’t handle watching animals die. I cried for a week. Other than that, a very well done horror movie.

While it’s more of a dark fantasy than a horror flick, it’s still pretty creepy!

18. The Exorcism of Emily Rose

I know that not a lot of people loved this one (it only has a 5/10 rating on IMDB), but it’s actually one of my favorite horror movies of all time.

I watched this one again a few weeks ago for the first time in like two decades. It’s not as scary as I remember, but still very enjoyable.

The newer version is mostly okay, but it does have one sort-of sex scene in it. The older one is better anyway, though.

It was originally created as a teen movie. Aside from a few very minor scenes, it’s pretty clean overall.

If your teens are willing to watch something that came out before you were even born (or in my case, a year after), you can’t go wrong with this classic.

I saw this in theaters and didn’t think it was nearly as scary as all of the screaming people made it out to be. It was amusing, though, and worth a watch. For those of us with motion sickness, it wasn’t nearly as bad as other cam-style movies.

Another one of my favorite horror movies! I only really liked the first one though.

26. I Know What You Did Last Summer

The late 90s was a great time for teen horror movies, wasn’t it? You can’t forget about this classic!

While the shocking ending is probably no longer a surprise to anyone, it’s still a great spooky movie!

Honestly, I thought this was probably about the worst sci-fi/horror movie I’ve seen in a long time, mostly because I was expecting something totally different. It’s also fairly pretentious. However, it’s clean, and a lot of other people apparently think it’s amazing since it has a 7.2/10 rating.

An oldie but a goodie! So clean, I could even watch it with my Gran!

I wasn’t sure whether to include this one because it’s not a horror flick so much as a “creature feature” I guess. More Jaws than Jurassic Park, though. I really liked it!

As you can see, I really didn’t go in any particular order at all. I tried to go from most recent back, but then I’d remember something and add it mid-way through. Hey, whatever, I gave you a table of contents at the beginning at least. 😀

Please do check the parent guides for each movie. Like I said, I only looked for movies without nudity and major sex scenes (some have kissing and what not, but nothing too crazy). I don’t have an issue with my teen watching violence in movies, but if you do, those parent guides are awesome. They’re “just the facts” without bias or a religious agenda.

Last, I use ReelGood to find out where movies are streaming. It’s not always 100% accurate. A few times it’s said that a movie was streaming on one of my services and it wasn’t, but like 95% of the time they’ll have a pretty complete list.