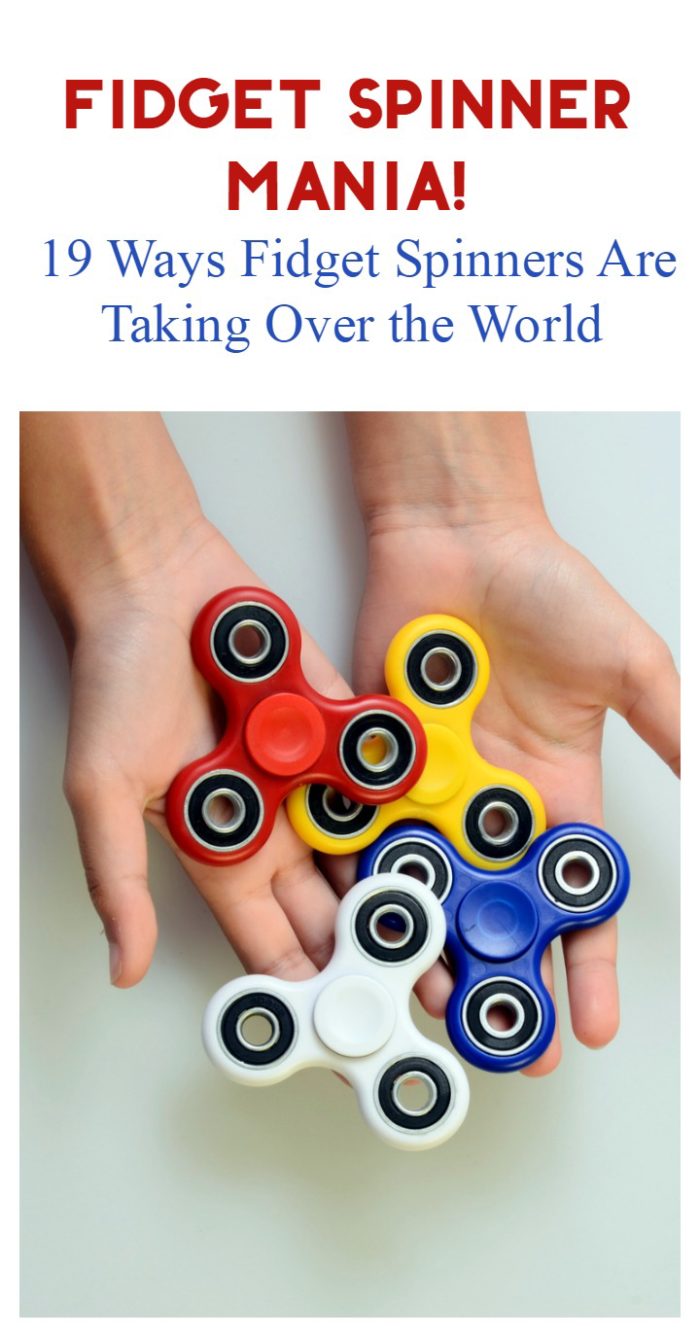 The other day, my friend (and writer here at Pretty Opinionated) Kristy blew up the internet with her Mom’s Fidget Spinner meme over on her Facebook page. While her sheer cleverness definitely played the biggest role in her success, fidget spinner mania helped make it possible. The latest fad for kids is popping up everywhere you look. For those of you who grew up in the 80s and 90s like I did, think Garbage Pail Kids or jelly bracelets. Except now we have the internet, so fads explode to even more epic proportions than ever before.Where we just collected GPK cards and traded jellies, people are going all out to either prove their love (or in some cases, hatred) of the latest fad. Check out these ways that fidget spinners are taking over the world right now!

19 Ways Fidget Spinners are Taking Over the World

Moms and kids are making their own!

While I haven’t had a problem finding fidget spinners for Jake, apparently some people are having difficulties. Maybe they just don’t want to order them online? Or maybe they don’t want to spend hard-earned money on a fad. I totally get that. For those people, there are a zillion and one DIY Fidget Spinner tutorials online. I’m not even going to try this because, well, I’m not THAT crafty. Too many moving parts (even one moving part is too many)!

Apparently, fidget spinners are driving dogs bonkers to the result of much hilarity. This particular Shiba Inu wasn’t at all impressed. On the other hand, some dogs seem to find them amusing, like this guy:

Freya is pretty indifferent to them. Mocha hasn’t seen one yet, but she’s so chilled she’s practically an iced latte, so I don’t think she’d care much either way. Seriously, she’s the most chilled dog we’ve ever had.

Schools are banning them left and right!

My poor son, his school banned fidget spinners the day his arrived in the mail, citing them as a distraction. Ironic, because they were actually designed to help kids with ADD and autism focus better.  Don’t feel bad, kids. Schools banned all the cool stuff that we loved when we were kids, too.

It’s not enough to just spin the fidget, kids (and adults, too, I guess) want to be able to master elaborate tricks with their spinners. In fact, there’s a video on YouTube called “pro fidget spinner tricks.” How does one get to be a pro? Is their like a circuit for competitions? Are we going to see fidget spinning show up in the next Summer Olympics?

They keep getting crazier!

idea was a pretty simple and clever concept, but like all things, it’s been knocked off a zillion times. While most knock offs are pretty much just different-colored versions of the original, some people are taking them to whole new levels. This guy unboxed a ton of spinners to show off the craziest out there right now.

Here are my picks for the craziest fidget spinners on Amazon right now:

Nail art is just as hot as fidget spinners, so it makes sense that someone would find a way to combine the two. This brilliant nail artist created the teeniest spinners that actually move on her fingernails AND she gives step-by-step directions on how you can do it, too! I think it would drive me nuts to have something like that on my fingernails (if I actually had any to speak of) but it’s still really cool to look at!

This guy uses them to explain science, and it’s really cool!

YouTuber Vivafrei uses a fidget spinner to show us some really neat scientific principals in a way that even I can understand. Check it out! Oh, and Happy Belated birthday, Mr. Frei!

Unfortunately, not all parents are thrilled with fidget spinners. Buzzfeed shared the stories of moms who are asking for a recall because their kids swallowed parts of the fidgets. I totally empathize with these moms, that has to be terrifying BUT so many things can be potential choking hazards if your child decides to swallow it. I think that it’s up to parents to keep them out of reach of children who are prone to swallowing objects.  I’d support putting a choking hazard on them since most other toys and objects that kids play with already have one.

After the choking incident, Clearly Cookies, a Dallas bakery, made “the first edible” fidget spinner. They ship nationwide. Info is on their Instagram page. I don’t imagine it will be long before we can find fidget spinner cookie cutters (I looked but didn’t see any yet).

There’s a freaking app for that!

Yes, my friends, there’s a fidget spinners app now. Here’s how it goes: swipe to spin. That’s it. Oh, and the more you spin, the more fidgets you unlock. Okay, there is probably a bit more to it than that, but that’s basically the gist. It has almost 3,000 reviews and 4 stars. The reviews highlighted do sound real, so maybe it’s awesome? I think the fun is in collecting new fidget spinners, just like in real life. Also, watching them spin is kind of mesmerizing.

While those are the craziest or coolest ways that fidget spinner mania is taking over, they’re not the only news stories about everyone’s favorite (or least favorite!) gadget. Here are a few more to check out:

I think it’s safe to say that fidget spinner mania is definitely taking over the world! If you’re not a fan, don’t worry, they may be here, but they’re not here to stay! Like all fads, kids will move on to something else next month. Very few fads make a lasting impression without having some sort of way to evolve. Things like Minecraft and Pokemon

What do you think about fidget spinner mania? Love them? Hate them? Do you think they’re here to stay? Tell me all your thoughts!