This is Why My Son Is Going to Cyber School This Year! 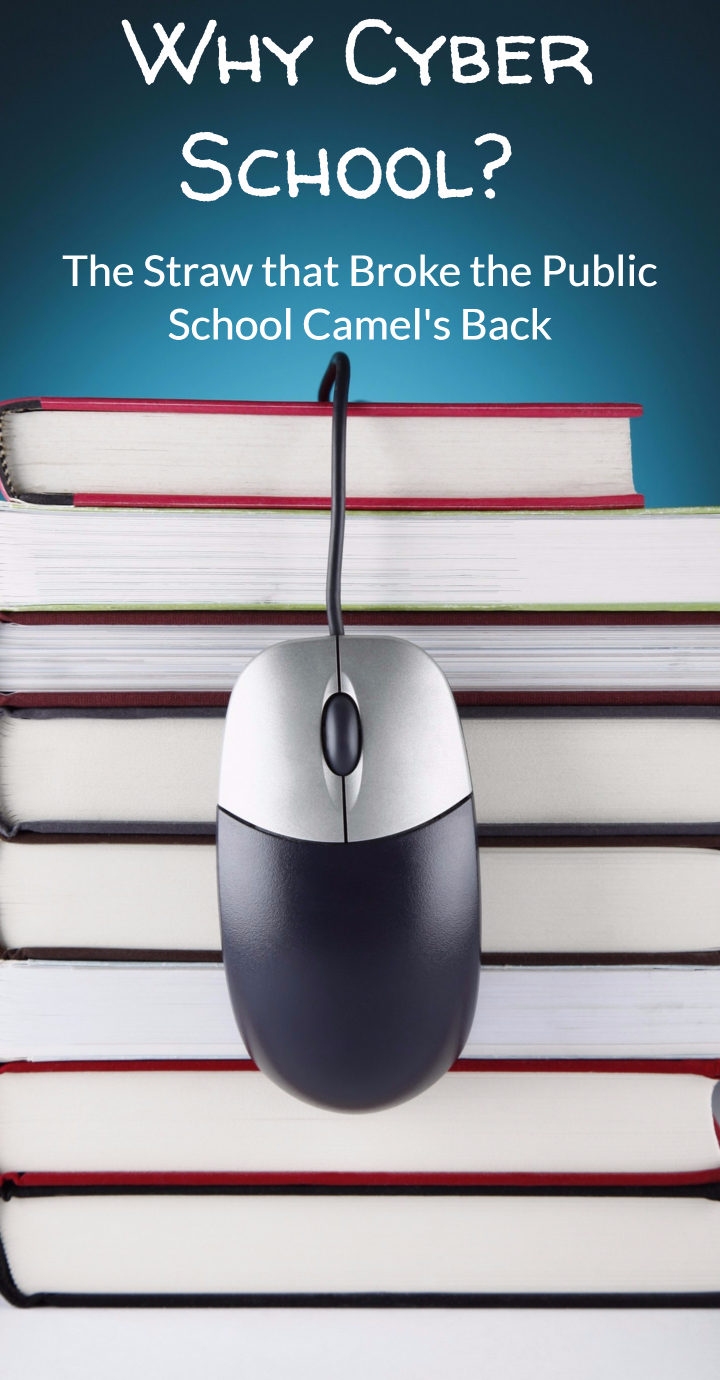 If you’ve checked out any of my back to school posts so far this season, you may have noticed that I pulled my son from public school and enrolled him in cyber school for this year. It was a huge decision that, honestly, was a long time coming, and I wanted to talk a bit about why I did it. My son is going into 7th grade next year. I have to let that sink in for a moment. I feel like he just started kindergarten, and now he’s already halfway through middle school! I remember his first day of kindergarten. He hid behind the mailboxes and it took ten people to coax him onto the bus. When he came home, though, he seemed pretty excited about his teacher and making new friends. Unfortunately, that excitement started to wane midway through the first month and has been on a downward spiral ever since.

While we made it through K-2nd grade relatively unscathed, I noticed a huge change in my son around 3rd grade. On the first day of school, his teachers told him that “playtime is over, it’s time to get serious, you’re not kids anymore.” Really? They’re 8 in 3rd grade! Coincidentally (or not), kids start taking standardized tests in 3rd grade here in PA. I’ve been opting out of the PSSAs since 3rd grade, but the teachers still teach to the test…and very little else. Science and social studies are crammed into one semester each while math and English take up a good 75% of the school day. Recess? Forget about it. Our district only gives elementary school kids 15 minutes of recess a day, and that includes the time it takes to get outside and get back in. Plus, if you so much as blink the wrong way, you lose recess. Third grade was also the start of my son’s experience with bullies. I thought I wouldn’t have to worry about that until middle school, but by the end of 3rd grade, Jake’s self-esteem and emotional well-being had taken a major beating. By the end of 5th grade, he was making some pretty scary comments about suicide. Throughout it all, I talked to the teachers, begged the principal to take action, spoke to guidance counselors. None of them “saw” the bullying, so they wouldn’t do anything about it.

When he started middle school last year, I thought it would get better. I know that statistically speaking, bullying is even worse in the middle grades, but his school swore they had a zero tolerance for it. I thought that they would have a better handle on it. I thought wrong. So wrong.

The final straw that broke the public school camel’s back

The final straw came after my son came home crying because his bully told him that he would be better off dead, “just like your dogs.” If you are a regular reader, you know that we lost all three of our senior dogs within a year of each other. Tasha in February of 2016, Maia on the 4th of July, and then Cooper passed away this past February, almost a year to the day of Tasha’s death. Cooper hit Jake the hardest. Right before Coop died, we also lost my aunt to cancer. Jake was close to her, too. The bully not only made horrible comments about the dogs, but also hinted around at some pretty nasty things about losing my aunt. Jake told me that if the kid said anything directly about her, he was going to punch him in the face. I can’t say I blame him. I did tell him that I would prefer he not get violent, but honestly, how much can a kid take? FYI, this camel doesn’t actually have a broken back, he’s just sleeping…I think.

Again, I talked to the principal, the guidance counselor, the teachers. The Vice Principal promised to take it seriously and investigate. He called me within a day, told me that he couldn’t find anything to back up Jake’s claims, and that since Jake retaliated by saying mean things back to the kid he was chalking it up to “kids being mean.” He went on to tell me that my son “brings a lot of the bullying on himself” but acting like a class clown. If the VP (or any of his teachers, for that matter) bothered to pay attention in basic psychology and developmental psych, he’d know that bullied boys often become class clowns to gain acceptance.

These bullies fly under the radar. They’re smart. They know how to act in front of faculty and how to get away with being horrific when no one is looking. I was bullied in middle school too, and the girls who did it were, for all intents and purposes, “teacher’s pets.” By this time, the camel was carrying an awful lot of straw on his back, but the one that broke it entirely came after Jake got in school suspension for fighting. He finally had enough, and he pushed one of his bullies into a locker. He didn’t start the fight, Another friend did, but Jake took full advantage of the “rumble by the lockers” to retaliate. Was he in the wrong? Probably. I know, as parents, we’re supposed to teach our kids to mind their temper and keep their hands to themselves. When other kids don’t play by those same rules, though, it’s hard to get mad at your own kid for retaliating.

Throughout 6th grade, Jake’s grades went down in proportion with the amount of bullying he was suffering through. I knew that, at this rate, he wasn’t going to make it through middle school, let along 6 more years of public school altogether. He was a happy kid when he’s home on weekends and school break. The moment he set foot back into that building, though, it’s like the joy was sucked right out of him. He started getting stomach aches from the nerves. He was calling me every day to pick him up. He spent so much time in the nurses’ office that she once called me by accident when she had a different Jacob in her office. I swear I was on speed dial!

Choosing the right cyber school for my son

By the end of March, I decided that we were done with our district. I’ve been thinking about cyber school for a long time, and not just because of the bullying. I feel like my son’s learning style just isn’t a good fit for his school. Some kids do amazingly well in public school, and there are thousands of schools out there getting it right when it comes to bullying. Jake’s just wasn’t one of them, and I had to face the facts that no matter what I did, they weren’t going to “get it right.” At least not when it comes to my son.

I was pleasantly surprised to find that Pennsylvania has a ton of cyber schools. The Pennsylvania Department of Education maintains a website that scores just about every type of school in the state, from cyber and charter to public and private. If you live in another state, I used to search term “Pennsylvania School Rankings,” the scrolled down the page until I found a legit looking site. You can swap out PA for your state and give it a try.

Once I had a list, I compared everything from each school’s curriculum and electives to their overall scores in different areas. We ordered course catalogs, looked at the sample lessons, poured over every single aspect of the sites until we had it narrowed down to two equally good choices (although for different reasons). From there, I let Jake make the final decision so he’d feel more invested in his education. The one he picked had slightly lower overall scores (but still very good) than our other choice, but he wanted it because the curriculum seemed like a better fit for him.

The enrollment process was a lot easier than I thought it would be. They walked me through any parts that confused me, but for the most part I was able to do it all on my own in a few days. We finished enrolling him a few weeks ago and all of his supplies have already arrived.

We’re actually really excited to start our new education journey. Jake is looking forward to having more flexibility when it comes to school work. He can breeze through the subjects that he rocks at and take more time with the trickier subjects. I’m excited to be his Learning Coach, to take a more active role in his education. I’m also super relieved that I won’t spend every school day worrying about getting a phone call from the nurse, guidance counselor, or principal. A less-than-supportive friend told me that I was doing my son a disservice, that by removing him from his public school I was teaching him “ways around” the problem instead of how to face it. Honestly, though, I don’t see it that way. I’m teaching him that there are always other paths to take. Just like there is more than one way to get to just about any location (even a remote island can be accessed by boat or plane, even if you sometimes have to jump out of the plane to get there), there’s more than one way to get to where he needs to be in life.

I want my child to grow up confident, to have the strength to get out of a bad relationship or stand up to a horrible boss. I’ve raised him to believe that he has an inherent right to know WHY something is expected of him before he goes along with it. To be an independent thinker. By forcing him to stay in a physically and psychologically unsafe learning environment, I’d be going against everything I’ve been trying to teach him his whole life so far. I’d be teaching him that he is powerless, choice-less. That he should play the hand he’s dealt instead of using the option of putting back a couple of cards and taking new ones. I know nothing about poker, so hopefully I didn’t completely mess up that metaphor, but you get the point!

So why cyber school? Because I can. Because we live in a time where, as parents, we have more options and more say over our kids’ education. Because it’s what’s best for my child. Is it what’s best for you? Only you know that. This isn’t an argument for cyber school or against public school. I think there are plenty of great public schools out there, and if we move to a new area, we may give it another shot. For now, though, cyber school was the smart decision.

Do you homeschool or cyber school? If so, I’d love to hear your tips for everything from staying organized to socializing with other kids!