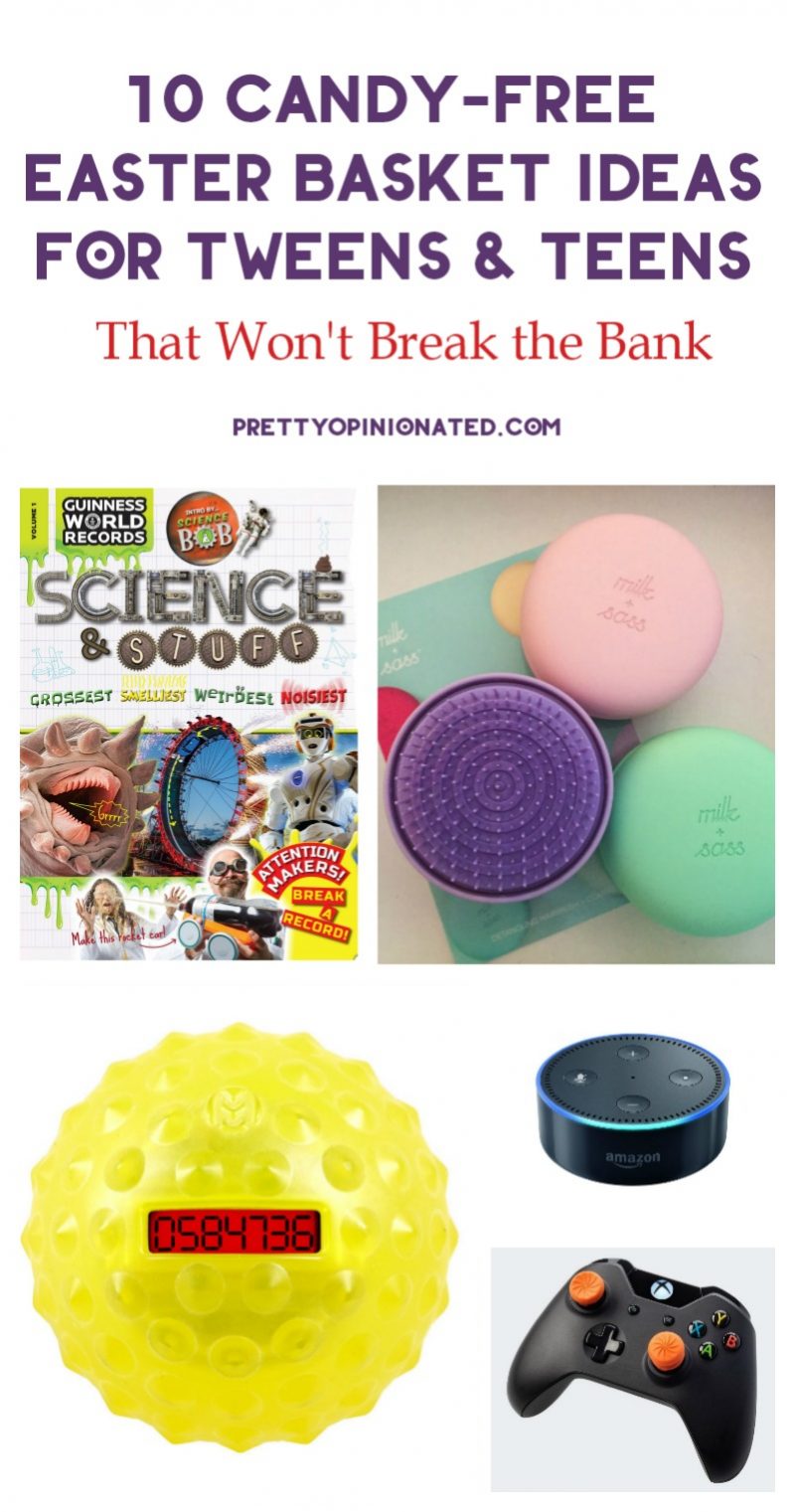 Wanna skip the sugar overload on Easter Sunday? Grab a few of these candy-free Easter basket ideas for tweens and teens! I promise, they won’t break the bank! My son has never really been a candy freak, so I have a lot of experience filling his basket with alternatives. When he was little, it was easy. I just got him small toys that went with big toys he already had (new Imaginext figures or Hot Wheels, for example). As he gets older, it gets harder and harder to find candy-free Easter basket ideas that aren’t outrageously expensive. His wish list these days leans more towards new XBOX One games, expensive computer accessories (VR glasses, for example), and other things that scream “major Christmas gifts” more than “Easter basket filler.” Here are a few ideas that will work for both boys and girls! These ideas are also great for little gifts throughout the year! Think birthdays, report card rewards, and so on.

This post contains affiliate links. If you make a purchase through these links, I’ll earn a tiny commission at no extra charge to you. Also, I received the Guinness World Records book and the adorable hair Macarons in exchange for sharing them. Thanks a bunch! Jake and I are having so much fun reading the Guinness World Records: Science & Stuff book. It’s educational, so it counts towards his daily requirement for cyber school (he needs 6 hours of education a day). The great thing? It’s so entertaining that he actually likes reading it. Jake has always been into science, and his interests are getting far more advanced than I can keep up with (in his spare time, he studies quantum mechanics and string theory). The book is filled with record-breakers across all types of science, including some really weird, gross, and just plain bizarre entries (like whether or not you can burp in outer space).

Along with a myriad of fascinating facts, it also includes a 10 different “record-breaking” experiments that your kids can do at home. The experiments, for the most part, use common household items. If you’re a homeschooler (or a cyberschooler), you can easily work them into your curriculum (or just do them for fun!). This book is definitely a must have for any tween who loves science, trivia, or just plain weird stuff. The Milk & Sass Macaron for Hair® is pretty much the cutest hairbrush on the planet. It looks like the cookie for which it’s named, and comes in a slew of fun colors. Open it up and find a brush on one side, and a compact mirror on the other. The Macaron fits comfortably in the palm of your hand. If it was just an adorable little brush, that would be one thing, but it’s not just any old brush! The bristles are designed to quickly and painlessly detangle even thick hair like mine. I wear my hair back all day and get these horrible knots right at nape. They’re so bad that my eyes tear up when I brush them out. With the Macaron, I can kiss those tangles goodbye in seconds and without tears. The perfectly placed plastic (I think, unless they’re some sort of magical substance that I don’t know about) bristles make the brush ideal for all ages and all hair types. While I adore the bright and fun colors, it also comes in black. If you think the Macaron is just for girls, think again. My son has super thick hair like me, and the Macaron is the perfect size for him to hold in his hand. At $12.99 each, they’re super affordable. So, my son comes in and says “I found a toy that I actually really want and will play with.” He’s nearly 13, so it’s been a long time since I’ve heard that. It’s called the Master a Million ball. It keeps track of how many times you bounce it (or toss it, etc, from what I can tell), and the goal is to get to a million. It has an app so you can compare your progress to other bouncers around the world. If it’s out of stock on Amazon, try Target. I checked Target.com and it is in stock there. As silly a concept as it seems, I’m looking forward to seeing how this ball gets my son away from the screens and actually engaged in some sort of physical activity. I like that the bouncing part is low-tech fun, but the tracker gives kids that high-tech feel that they crave. I’ll let you know how it works when ours arrives. Kontrol Freeks are always on my shopping list for both Easter and Christmas stocking stuffers. They’re constantly coming out with new thumbstick grips for XBOX and Playstation controllers. While I can’t pretend to understand the difference between, say, the Vortex (pictured above), the CQC, and the Call of Duty grips, my son definitely notices it. The Thumbstick Grips give your gamer more control over aim and what not. They also make the controls more comfortable to use and reduces “thumb fatigue”, or so my son tells me. I see people complaining a lot that they don’t last forever, so let me say upfront that they will wear out eventually.  How long they last depends on how much gaming your tween or teen does, and maybe on which set you get. Jake has had some that lasted 6 months, and some that didn’t quite make it that long. Like I said, it really depends on how heavily they’re used. I used to play a lot more board and card games with Jake, but at some point he kind of grew out of it. When he came home from school and told me he had to have this Exploding Kittens game, I bought it right away. Not because he’s spoiled and gets everything he wants, but because I was looking forward to a little bonding time with him. Since it’s pretty much just the two of us, it’s hard to find 2-player games that aren’t boring. Exploding Kittens can be played with 2-5 people (and up to 9 if you buy more sets). While I do think it’s a little pricey for a card game, it is a lot of fun! They came out with an expansion pack called Imploding Kittens that I’m thinking about grabbing for Jake’s Easter basket this year. Despite the somewhat disturbing name, it’s a family-friendly game for just about all ages. Bear with me for a moment, because I know I said “won’t break the bank,” and the Echo Dot is usually close to $50. First, this baby goes on sale quite a bit, so if you pay attention, you can grab it for a lot less. Second, even if you do pay full price, it’s totally worth it. I got one for Jake last Easter and he still uses it every day. The Echo Dot is handy for so many things. He uses his as an alarm clock, a task reminder (Alexa, remind me to clean my room at 9PM), a fact-finder, and a source of amusement (he enabled some sort of Spongebob skill that he finds hilarious). I also got the “Echo Only” Music Unlimited plan to go along with it so he can listen to millions of songs. If you’re planning to use it primarily for music, you will want to grab a set of speakers to go with it. Bluetooth is best in my opinion but you can also plug in  speakers with a 3.5 mm stereo cable. I can’t think of a single occasion where headphones haven’t been part of my son’s gift. He goes through them like crazy. It doesn’t seem to matter whether I give him $20 headphones or a fancy $200+ pair, he will need new ones within a few months. I did buy him a pricey pair for gaming headphones for his PC for Christmas (along with a 2-year plan), but for everyday use, I usually stick to under $25. The iJoy headphones pictured above fit that price limit and have overall good reviews. They come in a ton of different colors to fit your tween’s style. Jake likes to wear headphones when he’s watching videos on his Chromebook or iPad. He prefers the old-school style (with the full earphones), but you can usually find inexpensive earbuds or the “around the neck” style. I don’t really understand the latter, does the sound magically warp to their ears? Subscription boxes make great Easter gift ideas for two reasons. First, if you plan ahead and get their first box before Easter, you can open it up and use the surprises inside as basket filler (that’s not cheating, is it?). If you do this, add a little card that lets them know what subscription you got them (or keep it a surprise and let them find out when the next one comes). Second, it’s the gift that keeps giving! We’ve done nearly every “gamer & geek” subscription box on the planet by now I think. CrateJoy has a few that are new to us, so I’ll be checking there for some ideas. You can also check out my favorite Harry Potter subscription boxes for your Hogwarts-graduate wanna-be!

Right now, Jake has a subscription to Roblox Builder’s Club, EA Origins (which we both use, actually), XBOX Live (my brother’s annual gift to him), something for some Minecraft server that he loves, Music Unlimited, and about ten other things that I forget about until I get the invoice. Some of them are part of his Easter and Christmas gifts every year. Whether you’re continuing to pay for a subscription or starting a new one, you can print out a little card for their basket that says “good for one year/one more year of blah blah.” Another idea: attach that card to a themed gift, like an inexpensive Minecraft mystery figure for a Minecraft server, or a little book light for, say, an Amazon Kindle Unlimited subscription.

If all else fails and you just can’t think of anything else to give, it’s okay to go with money. My mom used to put 5 eggs, each filled with $5 bills in our basket. I’ve always done egg hunts with Jake. Even at 12, he still looks forward to them. Instead of candy or trinkets that will end up in the trash the next day, I fill his eggs with money. I decide how much I want to give him, then break it up into 1s, 5s, and even some quarters. One year, I forgot to get cash out of the bank and I did “digital dollars.” Half the time, he ends up giving me the cash anyway so I can buy him something online, so that worked out pretty well. You can get fancy and print out digital dollars, or just do what I did: go the cheap route and write “$1 Digital Dollar” on slips of paper! Hey, my son knows he’s not living with Martha Stewart, it all spends the same to him!

These 10 candy-free Easter basket ideas should be enough to fill your tween or teen’s basket with plenty of great stuff without totally busting your budget. Another suggestion: go smaller! LOL. Seriously, if you buy a ginormous basket, you’ll have to buy more to fill it. In fact, instead of a basket, do something useful, like a small tote bag or a storage crate.

What are some of your favorite candy-free Easter basket fillers?