25 Fun Facts About the Poconos 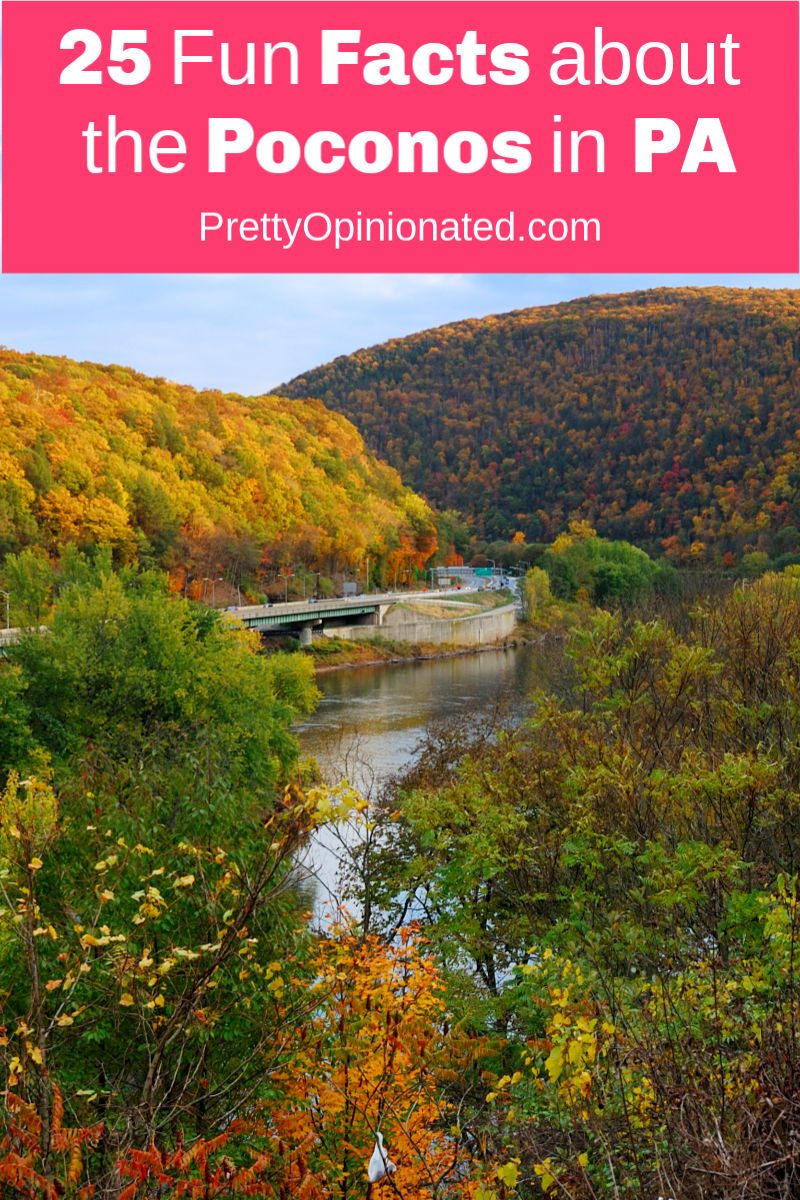 Thinking about visiting the Poconos in PA? Check out these 25 fun facts before you visit! Hint: you’ll find out who invented the heart-shaped tub! I present to you: Fun Facts about the Poconos! Read on to learn everything you want to know about my home!

Fun Facts About the Poconos

This post contains affiliate links. If you make a purchase through these links, we earn a small commission at no extra charge to you.

Thinking about visiting the #PoconoMountains in PA? Check out these 25 fun facts before you visit! Hint: you'll find out who invented the heart-shaped tub! #FunFacts Click to Tweet

Top 10 Facts about the Poconos

1. We can’t seem to agree on where they begin and end.

Ask 50 residents  “where are the Poconos,” and you’ll probably get 50 different answers. To me, it ranges from the Tobyhanna area, down to East Stroudsburg, and out to about Bangor. Much further than Bangor and you’re in the Lehigh Valley. I’m on the fence about whether to include Scranton and Wilkes-Barre.

Of course, my answer differs from the “official” version. According to PoconoMountains.com, the Poconos encompasses about 2,400 square miles and includes most of Carbon, Monroe, Pike, and Wayne counties. I made this little map a while back that gives you a general idea of the area (or you can download a better one here): 2. We were once considered one of the honeymoon capitals of the world

In our heyday, the Poconos were THE place to go on your honeymoon. We had countless stunning resorts that, sadly, are now either falling down, burning down, or already completely torn down. Penn Hills used to be one of the top destinations. It closed down years ago, and a few months ago the main building burned so badly that I could see the smoke from a few miles away.

3. The Poconos is home to the first heart-shaped tub Yep, true story! In 1968, Mr. Wilkins designed the very first heart-shaped tub for his Cove Haven Resort (which is still open and has a few resorts still standing around the Poconos, including Paradise Stream). He also has a patent for the first tub shaped like a champagne glass. We may not have invented the whole idea of making your own snow, but Big Boulder gets credit for perfecting it! Thanks to the Poconos, you can ski even when there is no snow, as long as it’s cold enough to blow!

5. We’re trying to become the indoor water park capital of the world

I think the Poconos is trying to become the #1 destination for indoor water parks. We started out with Great Wolf Lodge back around 2005. Split Rock Resort added their own smaller version, H2Ooooooh! That was it for a few years, then all of the sudden, BOOM! Water parks galore!

Now we have Kalahari Resort, which is pretty awesome and Camel Beach opened up Aquatopia, currently the largest in the area as of now. I heard that Kalahari is adding on, though. Plus, I heard that there are two more water parks in the works for different parts of the area.

6. We have 4 very distinct season

Like much of the Northeastern US, the Poconos has four very distinct seasons. Granted, the lines are blurring a bit more every year, but you can usually count on hot summers, mild springs, crisp falls, and snowy winters. 7. We welcome your pets!

The Poconos has over 40 different dog-friendly lodgings and attractions. Most of the major hotels in the area are very welcoming to pets. You can also bring your dog along to most of our hiking trails, including Bushkill Falls.

8. Most the area is named after the tribes who lived here first The original residents of the Poconos include:the Delaware, Lenni Lanape, Iroquois, Minisink, Lenape, Shawnee, and Paupack tribes. Look around the Poconos and you’ll see these names pop up often, from Lake Wallenpaupack to Shawnee Mountain.

9. We inspired the Haunted Mansion ride at Disney!

I just learned this today: the Harry Packer Mansion, located in Jim Thorpe, inspired the Haunted Mansion ride at Disneyland and Disney World. The place doesn’t just look haunted, legend says that it actually IS home to a few spooks!

The Harry Packer Mansion isn’t the only haunted house in the Poconos! We have plenty more places filled with things that go bump in the night, including:

More Fun Facts about the Poconos

There you go, 25 fun facts about the Poconos! It’s a great place to visit, but I wouldn’t want to live here. Kidding, I actually don’t hate it. I just want to move someplace where I don’t have to be afraid to drive on the weekends!

Have you ever been to the Poconos? What do you like about it?